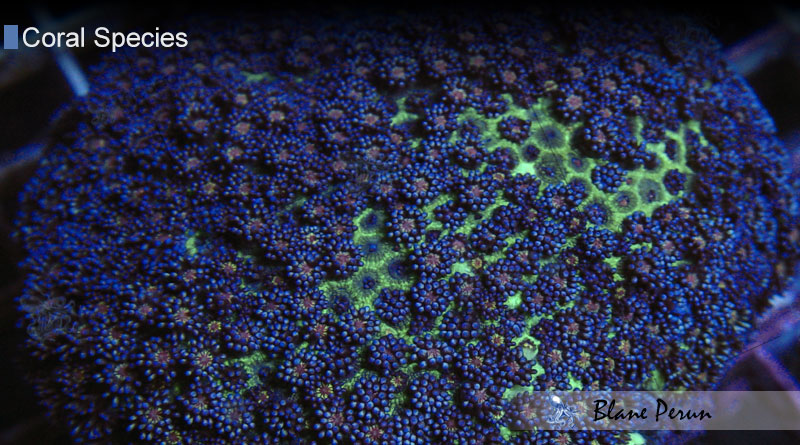 Alveopora, also called branching flowerpot corals, is a genus of stony corals which belongs to the family Portidae. Members of the genus are generally uncommon and they can mostly be found in turbid waters and on steep slopes of the Indo-Pacific region.

Compared to the hard exoskeleton of other hard corals, Alveopora species have a much lighter and softer skeleton. This skeleton is usually light and formed from interconnecting spines or rods. Depending on the species, the colonies might either be massive and compact, or branching resembling the growth of trees. The corallites, which are the hard cups made from the calcium carbonate secreted by the polyps, are generally very perforated, with the septa being formed by fine spines.
The polyps are generally large and of a fleshy consistency. These normally stay extended during the day as well as during the night. The polyps have 12 tentacles which tend to be swollen at the tip, resembling knobs. Just as with most other hard corals, these species live in symbiosis with zooxanthellae, tiny single celled protozoans which provide the corals with organic carbon as well as nitrogen in exchange of nutrients, protection as well as an elevated position needed for these photosynthetic organisms. The color of the polyps largely varies, from pale white to cream, grey or even mixed colors.

There are 27 nominal species in the genus, with 16 of them being labeled true species. The most notable species are A. allingi, A. fenestrate, A. spongiosa and A. viridis. These branching flowerpot corals have large corallites which are usually interconnected. The size of the polyps, which when elongated can reach even 30 centimeters, is the reason for their popular name.
Out of the 16 true species, 8 of them are living in the North, East and West coasts of the Australian continent. Some of the species can be found in the warmer tropical waters of the Pacific Ocean with some even living in the Red Sea.

Just like most other large polyp stony corals, Alveopora species get most of their nutrients from the zooxanthellae they live in symbiosis with. It is estimated that the corals get most of their organic carbon and roughly 90 percent of their energy needs from zooxanthellae, with the remainder being obtained from the column of water, where polyps may absorb dissolved organic matter as well as planktonic organisms.

Branching flowerpot corals can reproduce sexually, as well as asexually. They have both male and female polyps. These release eggs and sperm at the same time, with the fertilization taking place internally. This results in a larvae called planula. After a specific period of time, the planula is released into the water column. The free swimming larvae will eventually settle on the substrate, become a polyp and start excreting a calcium carbonate exoskeleton that will become a new colony. The Alveopora corals can also reproduce asexually through budding, and fragments of the colony can establish a new colony when separated.