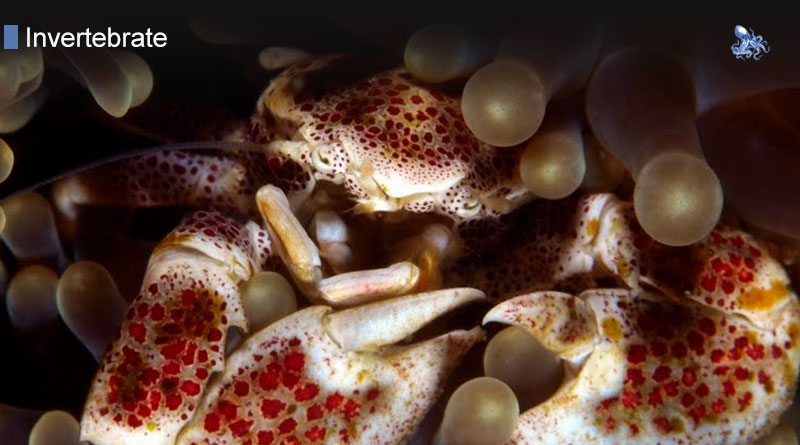 The anemone crab, also known as porcelain crab, is among the most fragile, yet most resilient little creatures that live in and around coral reefs. They derive their name from their symbiotic existence with sea anemone, a polyp that lives attached to the sea bed or hard surfaces in the shallow waters of coral reefs. It is interesting to note that the anemone is poisonous, but it never harms the crab living inside. The anemone protects the crab against predators, while the crab provides the plant used as host with food.
The other name of the crab refers to its fragility – anemone crabs often lose one or several limbs in fights or as a reaction to stress, limbs that grow back very quickly.

Anemone crabs are small, growing up to maximum 2,5 cm. Featuring combinations of orange, grayish-brown and orange, the animal’s coloring serves the purposes of hiding very efficiently.
Being a false crab, these creatures walk on only three pairs of legs and they have antennae and claws attached to their head. The body of crab is covered in a hard shell called the carapace.
This hard shell is periodically shedded in a process called moulting. The purpose of this shedding is to allow the anemone crab to grow. While moulting, the animal lies on its back and gets rid of its hard skin starting from the front, leaving the shell behind. As a measure of precaution, the crab always waits until it is dark to prevent being attacked while still vulnerable.

Anemone crabs feed on the mucus released by the host plant and on the plankton filtered out from the water with the help of its comb-like mouthparts. The animal extends its mouthpart like a feather and reaches out into the water to strain nutrients.

Anemone crabs are not very sociable animals, but they live with a partner. Mating occurs the same way as in the case of other crab species: the male places its spermatophore into the female, who, then, carries it for about four weeks, until the eggs are mature enough to hatch.
The young crabs are released by their mother directly into the water and the larvae will live floating on the surface of the water until they reach the size and maturity that allows them to feed in lower layers of the water as well. Once the young anemone crab is able to obtain its own food, it is strong enough to find its own host flower, too.