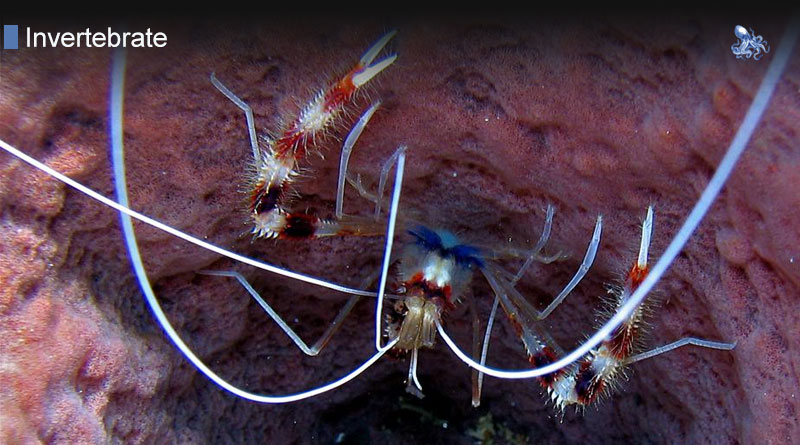 The banded coral shrimp, first described in 1811 and given the binomial name of Stenopus Hispidus, is not actually a shrimp at all, but a very similar looking decapod crustacean that lives in tropical reef zones. It is small (around 6cm in length on average) and easily identified by a distinctive red and white striped coloration that covers its abdomen, carapace, and larger third pereiopod. All of these colored segments are covered in spines, while the all-white sections of the banded coral shrimp (antennae, other pereiopods) are smooth and devoid of spines.

Stenopus Hispidus is generally found in warm, tropical waters, but specimens have been discovered as far north as the Atlantic shores of Canada, although the habitat in which they usually congregate is further south, in the Gulf Of Mexico and further towards Brazil, as well as the coral reef of Australia stretching on towards the shores of New Zealand. This specific pan-tropical distribution gives the banded coral shrimp a number of quite disparate habitats worldwide, and it is not yet known by which means the same species has managed to traverse the deep sea to arrive at these separate locations.

This particular decapod is grouped in with many shrimp as a cleaner. Its primary source of sustenance comes from eating the parasites and fungi off of passing fish. Usually, the banded coral shrimp will perch atop a coral or rock in a highly visible location and advertise to passing fish by waving its bright white antennae in a particular fashion. Fish recognize this advertisement and will stop at the “station” to get their bodies cleaned by the creature, which uses its three pairs of claws to remove any foreign material from the fish’s scales.

One of the ways in which the banded coral shrimp earns its distinction from true shrimp of the Hippolytidae family (Stenopus Hispidus belongs to a parallel family called Stenopodidae) is through its monogamous nature. Banded coral shrimp tend to find compatible mates that they remain with for life. This is in stark contrast to hermaphroditic shrimp that copulate with any nearby mates that meet their compatibility test and switch genders in order to do so. The banded coral shrimp maintains a single gender throughout its life cycle and does not transform at some point.