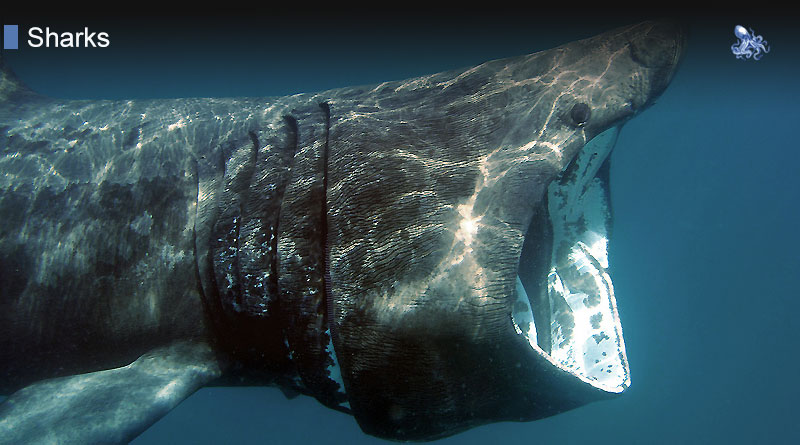 The basking shark (Cetorhinus maximus) is the second largest of all shark species, being the runner-up in the size contest that has the whale shark for winner. Its name derives from a peculiar behavior patters – these sharks are frequently seen swimming very slowly, having a good time basking in the sun. Unlike other large shark species, basking sharks love to spend time close to the surface of the water, and they also love taking long jumps out of it.

These large sharks can be found in temperate waters all over in the seas and oceans of the world. They prefer the surface of the water as well as the shallow areas around continental shelves. They are migratory species and they cover large distances following food.

The largest individual measured was found in the waters around Canada in 1851 – it was more than 12 meters long and weighed 10 tons. However, basking sharks do not typically reach that size – they normally measure 6-8 meters in length and weigh around 5 tons.
In terms of physical appearance, basking sharks look very similar to great white sharks, but they have a number of features that distinguish them. They have huge jaws, up to a meter wide and large gill slits that almost completely surround their head. Their teeth are relatively small, only 5-6 mm and they are hooked. Their snout is pointed and their skin is textured and covered in placoid scales and mucus.
Like all other sharks, basking sharks also have large livers – around one quarter of their entire body weight is taken up by the liver. The shark relies on this large liver for the continuous supply of energy it needs to keep moving and the liver is also known to produce oil that reduces the animal’s need to be constantly feeding.

Basking sharks belong to one out of the three plankton-feeder shark species. They are passive feeders, which means that they filter the water around to extract small fish, planktons and tiny invertebrates. They filter around 1,800 tons of water an hour to cater for their huge energy needs. They can push the water through their gills only when they are moving – therefore, they are continuously in motion.

Basking sharks are ovoviviparous, which means that the fertilized eggs are kept inside the mother’s body until the embryos are sufficiently developed to be able to survive outside on their own. While inside the eggs, the embryos rely entirely on the yolk sac for nutrition, there is no placental connection between them and the mother. The length of the gestation is not known. Some researchers think it lasts for about a year, while others say it can last up to two, even three years. The juveniles are around 1.5-2 meters long when they are born. The basking shark is a long-lived creature – both males and females reach sexual maturity between the age of 6 and 13 and they live for about 50 years on average.