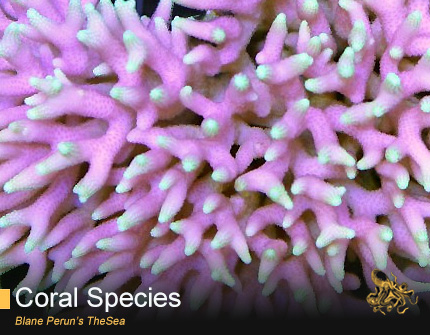 Birds Nest Coral, also known as Seriatopora Birds Nest, Needle, Finger or Brush Coral, is a small polyp stony (SPS) coral found in Tonga, Indonesia, the western Pacific region, the Central Pacific region, the Indian Ocean and the Red Sea. These are very delicate but beautiful corals, and birds nest coral care by experienced aquarists can be a beautiful part of a captive reef tank.

The skeleton of the Seriatopora is extremely fragile and has delicate, irregularly branched stalks with needle shaped tips. Variations of this type of coral occur as brown, tan, pink, green, purple and yellow. Birds Nest Coral requires a strong water current in the marine aquarium hosting it, and bids nest coral care depends on the dedication of an experienced aquarist.

This type of coral derives its nutrition from photosynthesis, which is performed by zooxantellae, a photosynthetic algae living symbiotically within the coral. This coral needs to be under sufficient light to accommodate for its feeding practices. It is also carnivorous in feeding habit and filter feeds a few times a week when open. It also feeds upon acellular marine invertebrates, meaty bits, zooplankton and phytoplankton.

Birds nest coral care can consist of being placed in a marine aquarium with a minimum capacity of 22 gallons or more. It can be placed anywhere between the middle and the top levels of an already established aquarium. This coral is sometimes considered semi-aggressive, so care should be taken in placing it near other aquatic material. It grows quite rapidly once it is established in the aquarium.

This coral is a wonderful addition to a captive marine aquarium due to its beautiful colors and interesting shape and texture. However, it is typically difficult to maintain, and therefore is best suited for established reef aquariums and expert handling by experienced aquarists. For continued good health, it will also require the addition of calcium, strontium and other trace elements to the water.

Birds Nest Coral care is considered a more advanced type of coral and is not for beginners. When initially placed in the tank environment, moderate illumination is sufficient until it has adjusted to the reef tank environment, and then the light intensity can be increased to create an environment for maximum health and color vitality. Care must be taken to prevent this coral from stinging other members of the tank environment.