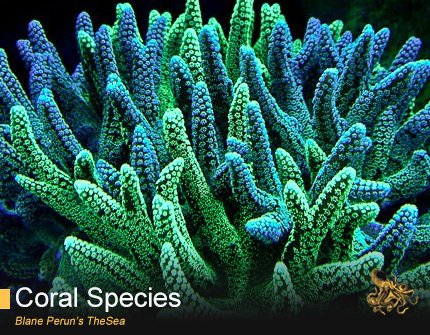 The birdsnest coral, also known by the taxonomic classification Seriatopora Hysterix part of a group that is broadly categorized as small polyp stony corals. An individual coral is actually comprised of hundreds of thousands of individual, genetically identical polyps that work together to keep the coral colony thriving in the shallow waters it calls home. While birdsnest corals may carry the vague appearance of being underwater plants, they are very different biologically and do not perform photosynthesis by themselves. They do, however, support photosynthetic algae that live in symbiosis with them and provide the coral’s sustenance.

This particular coral lives in symbiotic relationship with photosynthetic algae and takes additional nutrients from the surrounding waters. For this reason, it thrives best in waters that carry a good degree of flow, which helps bring those nutrients towards the immobile coral colonies. They can be thought of as water cleaners, and are often kept by aquarium enthusiasts for this exact reason, although their fragile nature makes them a rather difficult entry to the aquarium trade. Birdsnest corals thrive best in shallow, stony waters where they can extract the greatest amount of the nutrients they need to survive while providing light to their symbiotic algae.

Seriatopora Hysterix can reproduce both sexually and asexually, and often does so at the same time. Asexual reproduction takes place as the tiny individual polyps essentially clone themselves to create a larger coral colony on the same location as the main coral. This is the means by which small colonies grow into larger ones. Sexual reproduction takes place when the coral polyps release sexual gametes into the water in the hopes that they combine with those of another nearby coral and spawn a brand new colony. On the coral reef, all local corals usually release gametes at the same time in order to facilitate healthy spawning.

Coral reefs such as Australia’s massive Great Barrier Reef are so named because of their population of corals, and the presence of birdsnest coral within these ecosystems is an important element of the local ecosystem. These corals clean the water and provide a number of ecological benefits to other organisms in the vicinity including nutrients and harbors for the creatures with which it shares a symbiotic relationship. Many shrimp and other creatures live their entire lives nestled within the polyps of a coral colony.