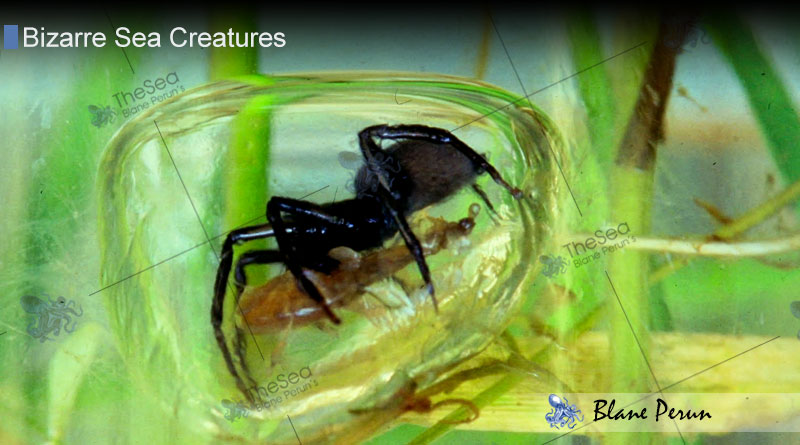 The diving bell spider (Argyroneta aquatica) is the only known species of spider that spends almost all its life in water and is a genus of its own as well. The spider’s size ranges from 7.8 – 13.1 mm and it eats, catches its prey, mates and lays eggs in the water, coming to the surface only for breathing once a day.

The diving spider can be found in freshwater environments where aquatic vegetation is plentiful, such as lakes, ponds and marshes. The animal’s habitat ranges through almost all of mainland Europe, the northern part of the Asian continent. The species received its name from the shape of the webs built by these spiders to serve as a tool to capture prey as well as for mating and laying eggs (purposes served only by the webs built by females). The bells are built from a material made from waterproof silk that allow for gas exchange, but not the penetration of water into the spider home and a hydrogel that scientists have not yet determined. They are built between the submerged parts of aquatic plants and are filled with air bubbles that the dwellers take rising to the surface.

Has a Very Painful Bite

The diving spider’s bite is not dangerous for humans, but it is particularly painful. The small animal has very thin and sharp fangs that can pierce through human skin and leave behind a painful, swallowed bite mark. The animal’s bite can cause local inflammation and fever.