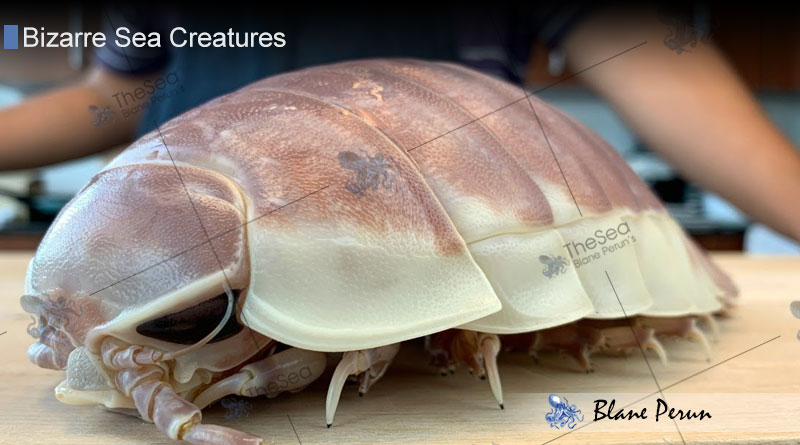 Voracious and Hardy, Resistant and Complex

The giant isopod (Bathynomus giganteus) is a huge crustacean that lives in the cold, deep waters of the Pacific, the Atlantic and the Indian Oceans, usually between the depths of 170 m and 300 m and the creature that is considered to be the largest isopod on Earth – typically, they reach the length of 7.5-14.2 inches, but individuals that reached the length of 2.5 feet have also been found. Their maximum weight is around 1.7 kg.
The giant isopod is an impressive critter in terms of appearance as well. Its body is quite flat and it is protected with a thick and resistant exoskeleton that has overlapping segments. The exoskeleton is flexible as well, so much so that it permits the animal to curl into a ball when it senses danger. The critter’s eyes are large and very complex, consisting of 4,000 facets. The head also has two pair of antennae.
Giant isopods are generally benthic scavengers, preferring waters that are cold, but what they like the most is meat, so they often feed on dead sharks, fish or squid and they may also hunt actively to catch slow-moving prey, such as sponges or sea cucumbers.

Can Go a Very Long Time without Food

Though these creatures love to eat and when they do, they consume huge quantities of food, they can resist for a very long time without grabbing a bite – an individual in Japan had stayed alive for five years without eating anything and many of them eat only once or twice a year.