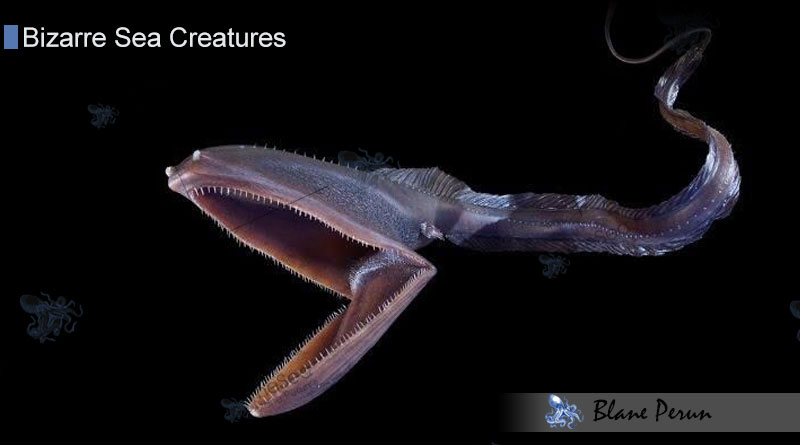 Not an Eel at All

The gulper eel, also known as the pelican eel or Eurypharynx pelecanoides, is a dweller of the deep layers of the North Atlantic, usually found at depths ranging between 500 m and 3,000 m. The creature received its name because of its mouth, which is larger than the animal’s body and looks and functions in a way very similar to that of the pelican’s. The animal is not very large – adult individuals reach only the length of 70 cm.
The body of the animal resembles that of the eel, but the creature is not an eel, in fact – it is a ray-finned fish. There are several physical features that betray its true identity – it doesn’t have swim bladders, pelvic fins and scales. The gulper eel’s eyes are also different from other deep-sea creatures – they are much smaller.
The diet of the gulper eel consists mainly of small crustaceans. They have quite an appetite – their stomach is very flexible and it can stretch to accommodate large amounts of food. The large jaws, that take up about 25% of the animal’s total body length, serve efficient eating, but they are lined with very small teeth that do not make it possible to crab larger bites.

Has a Whip-Like Tail That Also Emits Light

The creature’s tail plays an important role in movement as well as in capturing prey. The animal uses the tail to propel itself forward and the tail also emits a pink glow or red, flashing light to attract prey.