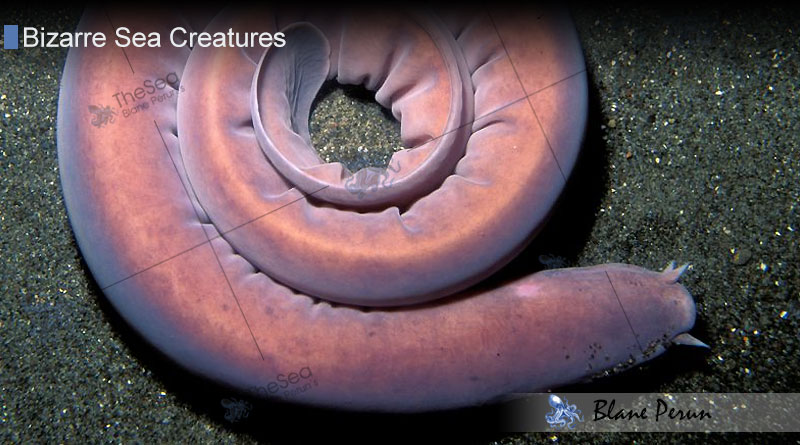 The Pacific hagfish (scientific name: Eptatretus stoutii) is a member of a family of fish that look like eels, but are not even remotely related to eels. One of its most typical feature is that it produces a slimy substance on their skin that emanates an odor perceived as foul by other inhabitants of the water and drives away all predators (when the animal senses danger, it can produce a huge quantity of the slime within seconds).

It is a species that has a wide distribution, being commonly found in the Eastern North Pacific, mainly between Mexico and Canada, its preferred depth being quite wide, between 16 and almost 1,000 meters.

The Pacific hagfish is no small creature – it can reach the length of over 60 cm (though most individuals grow to only around 40 cm). The body is quite colorful, too – the dark brown base color is spotted with blue and purple.

Has a Skull, but No Vertebral Column and No Jaw

The Pacific hagfish, like all the other members of its family, does have some bones that can be considered rudimentary vertebrae, but they do not form a contiguous column (which accounts for the animal’s unique ability to tie nots from its own body. The animal is also jawless, and because of this it swims with an open mouth all the time. These special features and extensive research have led scientists to the conclusion that hagfish are creatures that have been around for around 300 million years and they have not changed much ever since they first appeared.