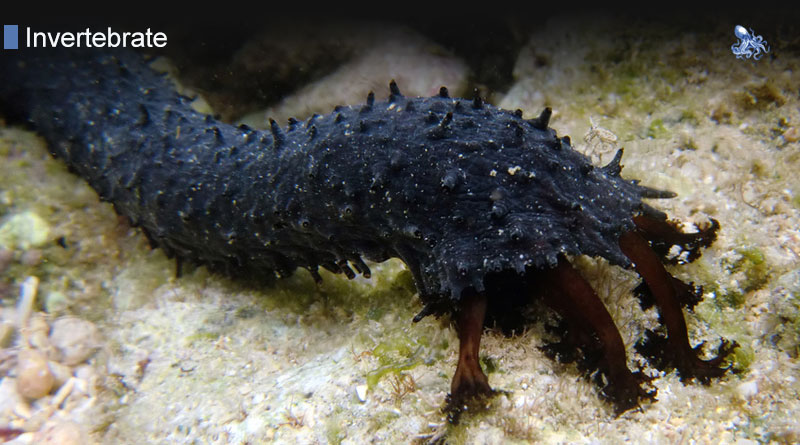 The black sea cucumber is known in scientific circles as Holothuria leucospilota and can be described as a shallow water species found mostly in the waters of the Indo-Pacific, that is also part of the sub-genus Mertensiothuria. This Holothuria species can reach significant sizes, and its complex and unique defense mechanism is one of the most distinctive aspects of its biology. Also a distinct trait is the sea cucumber’s high tolerance for fluctuating salinity, which allows it to thrive in many areas that other sea cucumbers can’t survive in.

The black sea cucumber is just about 16 inches long when relaxed, but it can also reach a length of more than 1 meter when stretching out its rounded, cylindrical body. The animal has a dark colored body that gives it its name, and its pale-gray tube feet and 20 oral tentacles surrounding the mouth and featuring intricately branched tips are the features by which researchers are most easily able to identify the species.

You can find this animal in the shallow waters of Australia’s northeast coast and as far west as Africa. Many other locations in the Indo-Pacific are also known to house the Holothuria leucospilota, some of the most well-known being Japan, Singapore, and the rocky coasts of surrounding islands. Coral reefs and rocky areas are the sea cucumber’s favorite habitats, and it is not uncommon to find this species hidden under a boulder or concealed in the rocky crevices that are found even between smaller rocks.

The Holothuria is an omnivore, which implies that it feeds on virtually any type of organic matter it can find, including detritus. The species’ unique feeding mechanism allows it to also ingest sand along with the tiny sea creatures it feeds on, and sift through the biofilm before discarding it. The scavenger uses its 20 tentacles to aid in this process, and proceeds to shovel food into its mouth without any exterior filtering. Its body is extremely flexible, allowing the sea cucumber to contract out of sight in case it is attacked or disturbed. An additional defense is its ability to emit Cuvierian tubules from its anus, which have the role of ensnaring predators and giving the black sea cucumber the additional time required to make its escape.

The islands of Turks and Caicos are found in the Atlantic Ocean’s Lucayan Archipelago in the West Indies. A British

The capital of Puerto Rico, San Juan is one of the oldest European-established cities in the Americas, second only to