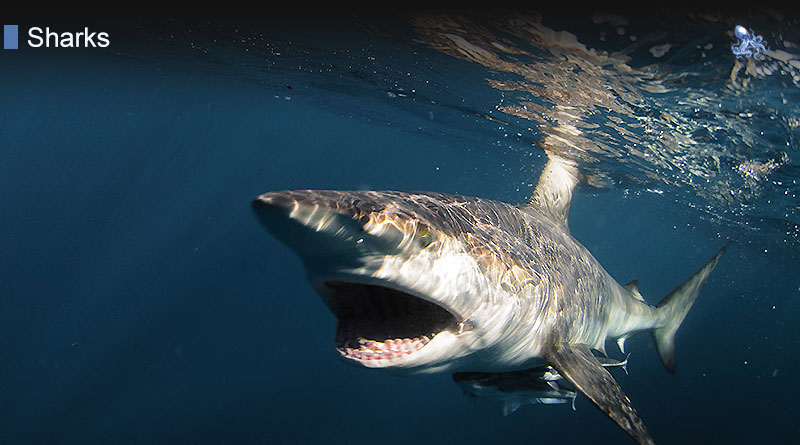 The blacktip shark (Carcharhinus limbatus) is one of the most common sharks of the warm coastal waters around the world. These medium size predators are frequently spotted by tourists doing their characteristic spinning jumps out of the water. They may look scary, but as a matter of fact they are quite timid, showing curiosity towards humans, but always from a safe distance. They can become aggressive, but only if they sense the presence of food.

These sharks are not pelagic, preferring inshore waters and areas close to coastlines where water is not deeper than 30 meters. They are frequently found in bays and mangrove swamps, too, but what they really like is

coral reefs. In the Atlantic, they can be mostly found between Massachusetts and Brazil, but they are frequently seen in Mediterranean waters, in the Indian Ocean, especially around Madagascar and in the Eastern and Western Pacific.

They are called blacktip sharks because most of them have fins ending in a black tip or in black edges with the exception of the anal fin that has no black edge. The black color on the fins fades with age, making old blacktips difficult to distinguish from other shark species. They have a yarn-shaped, fusiform body that grows up to 1.5 m in length and around 20 kg in weight, long gill slits and a pointed nose. They are dark colored, usually of a brownish-grayish blue on their back and they have a lighter-colored belly, with a characteristic white stripe on the flanks.

Blacktip sharks are piscivorous. More than 90% of their diet consists of schooling fish, their favorites being herrings, anchovies, mackerel, catfish, cornetfish, butterfish, and even boxfish. They also eat rays and smaller sharks and occasionally they feed on crustaceans, too. They usually feed at dawn and dusk – that is when they can be seen doing their spinning leaps. The jump is thought to be the last phase of a feeding run – when feeding, the shark goes down deeper in the water, then darts upwards to disrupt the movement of the fish school attacked. The shark leaps out of the water as a result of the high speed it reaches while attacking the prey – according to some measurements, the speed of the shark during a jump can reach 6.3 m/s. One dart lasts around 25 seconds.

Blacktip sharks are viviparous, which means that they give birth to live juveniles that develop in the eggs carried by the mother inside her body until the young are ready to survive on their own. Gestation lasts for around a year and females give birth to 4-10 pups in one season. Juveniles are usually born in calm, shallow waters such as bays where they spend the first year of their life. Blacktip shark individuals reach sexual maturity around the age of 5 and they live for more than 10 years.