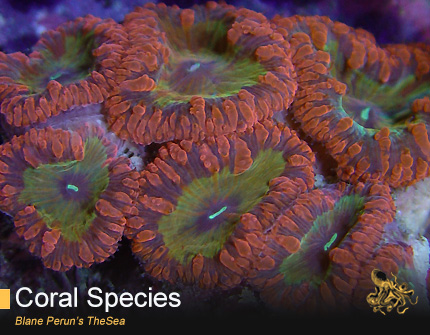 The blastomussa is a hard coral species of the Micromussa genus that populates the waters of the Indo-Pacific region, and is also known as a Blasto Coral, Pineapple Coral or Branched Cup Coral. Most can be found on deeper reef slopes where the position provides an excellent shield from rough wave conditions and other environmental disturbances.

Sometimes confused with the Candy Cane coral, it can be distinguished by a more compact and rounded appearance. It can also be mistaken for Mushroom Anemones because the fleshy polyps will usually cover the entire skeleton when they are wide open. Blastomussa is a rare coral, and only contains two distinct species- the Merleti and Wellsi.

Blastomussa are colonial creatures and when fully formed, resemble brain corals when polyps are completely open. The centers of blastomussa are vivid neon which seems to radiate and glow when exposed to light. Species of blastomussa are usually dark red with shades of brown and green colors mixed in its bodies. The two types of blasto have very different size polyps and therefore easy to identify from one another. The B. Wellsi have polyps that are large and fleshy, and range from 1-5cm in size, while those of B. Merleti are less than one cm. The composition of B. Merleti is made of pipe-like polyps, which elongate the skeleton that connects to the base and ultimately other polyps in the colony. Reef hobbyists are able to easily propagate this type of blastomussa because of the lengthy polyps which break off easily into single or clustered polyps, allowing for new colonies to form in alternate locations.

What blastomussa doesn’t share with other types of hard corals, it makes up for in its photosynthetic nature. While it does secure food from other sources, the majority of its nutritional content is made from exclusively the minute algae it hosts within its body. When blastomussa do hunt for prey, it uses its feeding tentacles to expand and trap organisms that are brought by in the ocean currents. When these tentacles are extended to full capacity, the coral mimics the appearance of a sea anemone.

There are many organisms that live in coexistence with the blastomussa. Organisms find the corals attractive because the skeletal structure makes an obscure hiding place where they can be protected from predators. Neighboring sea creatures that prefer the blastomussa in which to settle include sponges mollusks, various sessile invertebrates and even other corals.

The blastomussa corals are hard to obtain, mainly because of their natural location within the reef, and rarity. By dwelling at significant depths and hiding on the side of lower reef slopes, blastomussa are difficult to harvest, and will therefore sell for high prices to hobbyists and reef enthusiasts. Individual polyps can sell at prices of $70 or more!