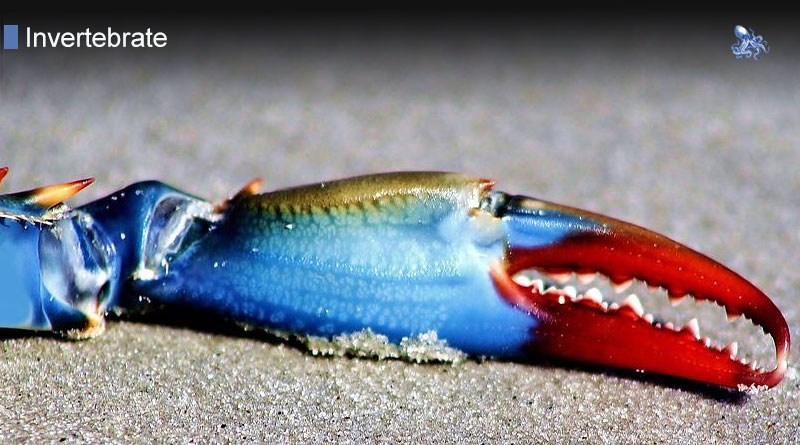 Callinectes sapidus, also known as blue claw crabs, are among the most widespread and most graceful creatures that live among corals. Characterized by adaptability, these blue-colored predators can be found in freshwaters with 0 salinity and in highly saline waters alike, but their resistance and resilience are not the only features that make them so exciting.

The crab got its name from the bright blue coloring of the claw. Blue claw crabs have a bluish or olive-colored carapace, with brightly colored claws that have red tips in females.
Adaptability manifests itself with every feature of the crab’s body. The paddle-like legs make these creatures excellent swimmers and the multiple lines of teeth make them the ultimate predators of the sea bottom. They have multiple eyes and behind each eye there is a marginal tooth, the pair of teeth at the end featuring a spine.
Blue crabs also have an extension to their body called the apron. This is also the feature examined in order to distinguish between males and females: the apron of males is long and slim, while females have an apron that changes in shape from triangular to rounded as the animal matures.
Blue crabs are shedders, which means that they grow and develop by shedding their shell. The new shell starts to form around the legs, then it moves towards the paddles, until it becomes hard enough to be able to protect the crab – that’s when the old shell is shedded.

Blue claw crabs would eat anything that moves around in the water. They feed on small fish, dead and alive as well, sea lettuce, clams, other crabs, even decayed plants found on the bottom of the sea.

The mating season of blue crabs ranges from May to October. Males mate more than once during their lifetime, but females have only one mating season, after their pubertal molt, when their shells are still soft. Females attract males with the help of pheromones released through urine and the males enter into fierce competition for the privilege to mate.
During the act of mating, the males transfer their sperm to the female that produces an incredible 2-8 million eggs. As the female’s shell is soft, the male carries and protects her until the shell becomes hard enough to offer sufficient protection. After this, the females are let go and they travel towards estuaries to be able to release their eggs into swift waters that will carry the eggs towards saline waters.
Blue claw crabs have a lifespan of about 3 years.