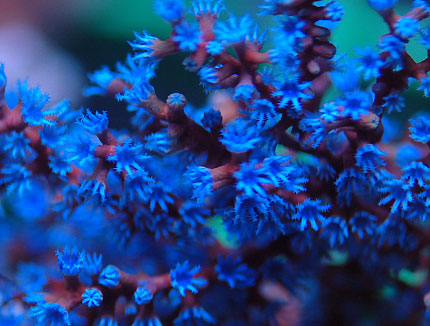 The blueberry gorgonian (Latin Guaiagorgia and a member of theAcalycigorgia species) is a native to the deep waters of Indonesia, and is one of the more unique and beautiful gorgonians.

When compared with other corals and more specifically, gorgonians, the blueberry is one of the more recent species discovered in the reef community, and is also referred to as Blue Sea Fan or Blue Sea Coral.

As with any gorgonian, no two corals are identical. When the blueberry is closed, their coloring ranges from brown to orange, and they look like any ordinary coral. But when the polyps reopen, large, light blue polyps emerge to create a huge cloud of pale blue against the red branches of its frame. When the gorgonian is fully open, it is similar to a blooming underwater flower. The skeleton is flexible and colonies form underwater forests on the ocean floor with their plethora of blooming polyps and latticed branches, and sway gently in the ocean currents because of their flexible skeletons.

Because the blueberry gorgonian resides in the deep waters and is not a photosynthetic coral, its diet consists completely of trapped organisms that pass through in the ocean currents. This attribute makes the coral very difficult to maintain in a reef tank, and frustrates and deters many hobbyists from acquiring them. In an aquarium, the coral has to be given special attention and frequent feedings (it will perish without eating often) Beginner aquarists and reef enthusiasts should not attempt to acquire a blueberry gorgonian because of the high level of difficulty the coral requires.

The water and lighting qualities need to be constantly monitored and strictly followed. Since the coraln is not photosynthetic, only a low or medium level of light will be needed in the tank. The temperature should be set much lower than other gorgonians to mimic the cool water stream that the coral experiences in the deep waters of its native environment. Water qualities should have a temperature between 68 and 79F, a pH value of 8.1-8.4, a sg of 1.023-1.025, and a steady, intense water flow. Gorgonian feedings should take place very often and consist of a variety of micro organisms, including frozen baby brine shrimp, phyto plankton, marine snow or other recommended foods. Trace elements including iodine, calcium, and strontium are recommended from time to time to supplement the heath of the coral.

When placing the blueberry coral into the tank, a segment of live rock around the middle to top of the tank should be used to anchor the coral into place. This can be done using underwater epoxy, which is a putty-like glue substance used frequently in marine tanks.