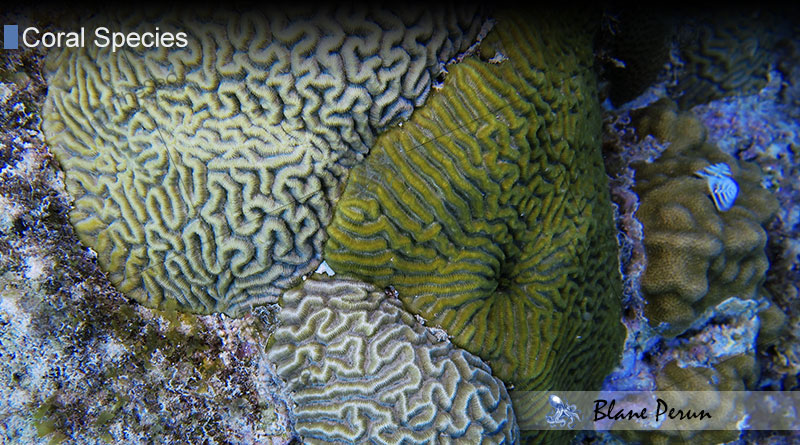 Brain coral is a name commonly given to corals which are members of the family Mussidae. The colonies are usually spheroid, with the corallite septa being twisted and curved in mazes giving it a brain-like appearance.

Mussidae species usually form grooved flat or dome-shaped colonies that can reach several meters in diameter. Each coral colony is spheroid and it is formed of polyps that are genetically identical. The colonies are meandroid, meaning that they form valleys. These are also complemented by walls which are shared between polyps. The corals may have protruding lobes or may be flat on the surface. The corallite walls are usually sinuous, with septa being commonly teethed. The colors of these corals can vary greatly, from dark brown to cream, green or even yellow or red. Some of the largest colonies can live for up to 900 years.

These coral species inhabit large areas in the Pacific as well as in the Indian Ocean. Species can be commonly found as North as Japan and as South as the Eastern coast of Australia. Some species live in the Red Sea, others can be found in the Southern tip of Africa, in Fiji, Indonesia or even Papua New Guinea. Habitats varies as well, with colonies being found in back reef flats, protected slopes, backwater areas and at depths from 1 to 40 meters.

These coral species have develop diverse methods of feeding. However, most of them rely almost entirely on a symbiotic relationship with tiny unicellular protists called zooxanthellae for food. These tiny dinoflagellate create basic carbohydrates through photosynthesis, but they need light. The coral colonies provide these organisms with elevated positions to allow them to gather more light, while the polyps receive nutrients in the form of organic carbon and nitrogen.
Energy needs are most commonly supplemented via predatory behavior. The polyps, or the fleshy organisms which reside inside the calcium carbonate exoskeletons they excrete, have tiny tentacles with nematocysts or stinging cells at the top. These actively catch and sting prey such as zooplankton organisms which are then inserted through their mouths and in their digestive sacs for consumption.

Brain coral species have several means of reproduction, both sexual and asexual. Asexual reproduction can be achieved in three ways: budding, fragmentation or polyp bailout. Budding is a form of polyp division where the split results in two polyps. The budding can be extratentacular or at the exterior, or intratentacular. Fragmentation occurs when powerful currents cut off a part of a colony which can establish itself once it settles. Polyp bailout occurs when the colony is in danger, and polyps detach themselves to reattach in safer waters. Sexual reproduction usually occurs during massive spawning events when gametes are released. Fertilization can be internal or external. Fertilization results in brain coral larvae that will reattach to a substrate, transform into a polyp and then give birth to another colony.