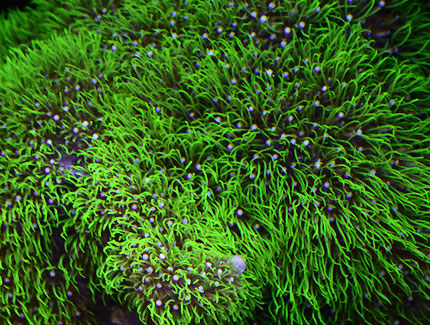 Briareium, also known as Star Polyp, Starburst Polyp, Mat Coral or Pacific Encrusting Gorgonian, is a coral species widespread in the Atlantic Ocean just as much as in the Pacific, mostly on reefs around Solomon Islands, Bali and Jakarta as its natural habitat.

A member of the Clavulariidae family and one of the hardiest coral species, Briareium lives in colonies in areas that get a fair amount of light as well as moderate to strong water flow. They do not like areas with a lot of algae and dirt, and they do not grow in the vicinity of anemones, either, but if they find sufficiently clear water, they will grow quickly and form low-rising, carpet-like colonies.

Briareium lives in fairly extended colonies. Consisting of individual polyps a few millimeters long (usually not more than 12 mm), Star Polyps are connected by a mat of rubbery consistence and of a bright purple in coloring, sharply contrasting the color of the polyps. The color of the polyps varies from tan and light brown to strong green, depending on the intensity of the light they get – the more intense the light, the stronger the color. The polyps that live in the Atlantic Ocean are mostly brown, while the species in the Pacific are predominantly green.

Star Polyps can reproduce through division of the mat and by broadcasting a spawn of eggs and sperm as well.
Sexual reproduction happens by the release of eggs and sperm that combine and float freely in the water until they find a suitable place to settle. Once settled, they grow into larvae also called planulae; then they grow further and start a new colony. It is interesting to note that sexual reproduction usually occurs as a mass event, with all corals in a specific area broadcasting their spawn simultaneously.
Asexual reproduction happens by means of division. A small part of the mature coral gets torn off the body of the mother, then travels to find a suitable place for settling down and starting a new colony.

Star Polyps photosynthesize with the help of the algae they live in a symbiotic relationship with. They also feed by filtering the water to avail themselves to microscopic planktons and other invertebrates, but photosynthesis still remains the prevailing way for obtaining nutrients; therefore, they are very sensitive to light intensity and water flow. They best thrive in areas that get strong light and currents that are strong enough to keep their tentacles permanently in motion.

When the environment and the living conditions are optimal, these polyps tend to grow fast and even though they do not sting, they are considered to be aggressive corals, with a tendency to grow over other corals in their vicinity. They are resistant to the changes in their living conditions, but they still respond to the changes around – if conditions become unfavorable, they survive, but they stop growing. However, once the optimal conditions are restored, Briareium corals recover quickly and resume growth.