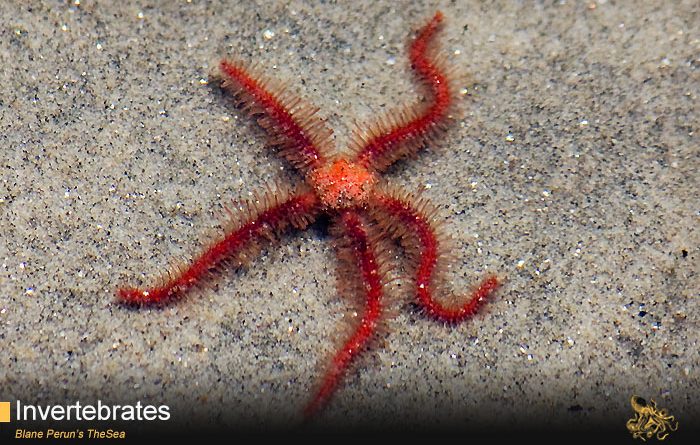 Although not technically a starfish, Ophiura ophiura, also known as the common brittlestar or the brittle starfish, is an echinoderm with a curious anatomy and features that set it apart from all other similar species of marine animals. The brittlestar can be yellow, light orange or dark brown in color, and they have thinner, more fragile arms than most starfish, even though their central disc is larger in ratio. Brittle stars are much faster than starfish, and their name comes from the fact that their arms tend to be brittle and break off easily. Like their more resilient echinoderm counterparts, the brittle stars can also regenerate lost limbs.

The tendency that brittle stars have toward perfect radial symmetry is much greater when compared to that of common sea stars. These species are, therefore, more balanced and stable than other echinoderms, which partially accounts for their more agile movements. There is a clear distinction between the central disc and the arms of a brittlestar, and the disc contains all the organs associated with digestion and reproduction, so these never enter the organisms’ arms. Also, unlike in the case of starfish, the madreporite are typically contained within one of the five toothed jaw plates.

Ophiuroids like the brittlestar diverged over 500 million years ago and can be found today in all major marine habitats, regardless of temperature and water conditions. You will typically be able to spot the brittle starfish at a depth of around 16-35 meters below the surface, despite the fact that other ophiuroids have evolved to withstand even the high pressures associated with depths of over 6,000 meters. Currently there are about 1,900 species of brittle stars known to exist, and their development, as well as the differences between the evolution of common starfish and brittlestars, continues to baffle researchers with many mysteries regarding invertebrate evolution.

Another uncommon anatomical trait of the brittle star is its unusual water vascular system featuring a single mandreporite. Unlike in the case of sea stars, ampullae are completely absent. The nervous system is also worth mentioning, and as in the case of other ophiuroids, the brittle starfish has specialized nerve endings in their epidermis, which provides them with a keen sense of touch and ability to perceive chemicals or the approach of other animals more easily than most of its echinoderm relatives.