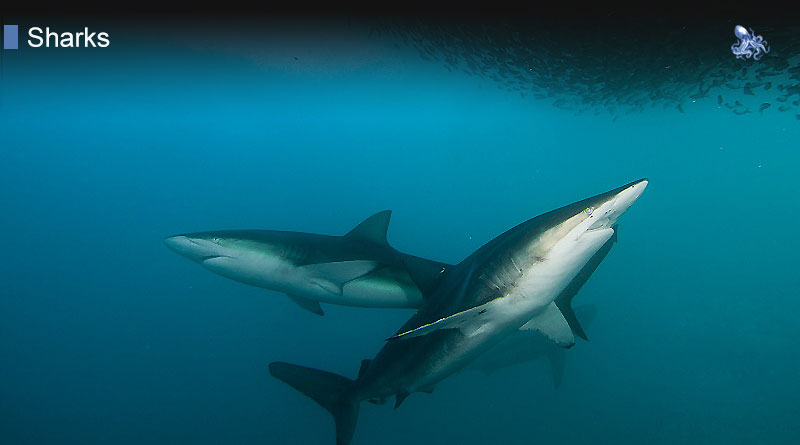 The bronze whaler – or copper shark, as it is also known – is considered to be one of the most highly efficient underwater hunters found in temperate waters. Quite large, slender, agile and intelligent, these sharks will work together to find food and even display complex social behavior. Found mainly in the northeastern and southwestern regions of the Atlantic Ocean, they are extremely efficient as predators, using their numbers to their advantage and knowing their prey well. Copper sharks are only known for attacking humans on very few occasions, ranking well below other large requiem shark species found at the top of their respective food chains.

Copper sharks feature long, streamlined and slightly curved bodies that are capable of excellent speed and agility, especially through the use of their large, elegant pectoral fins and tall, thin dorsal fin that also

promotes improved direction control. These sharks have five pairs of gill slits that are quite long, and their serrated teeth differ slightly between adult males and females, males often featuring longer, more finely serrated and curved teeth than their female counterparts. Bronze whalers have received their names as a result of their bronze or copper colored skin. In some cases, they may also display shades of olive gray.

Bronze whaler shark species live mostly in temperate areas, and avoid overly warm or cold waters. Their threshold is usually around 12 degrees C and above, preferring regions such as the coast of Morocco, South Africa, the Canary Islands close to Argentina and parts of New Zealand and Australia, where copper shark populations are quite prevalent. The species can inhabit many different types of habitats, being quite resilient when facing temperature and salinity changes, and usually able to thrive in rocky regions and offshore islands located on both hemispheres.

One of the unique aspects of bronze whaler sharks is their ability to organize themselves into groups when hunting, feeding, mating and migrating. Adult females and their young ones usually migrate to the subtropics for the winter to escape harsher temperature changes, while pregnant females often move to coastal nurseries, where they give birth. Although copper sharks can be spotted as solitary sharks on occasions, it is not uncommon for them to organize into large groups when hunting, even being able to carefully gather together small schools of fishes, or even larger prey, before attacking.

Although copper sharks don’t usually go for human flesh, they have an uncommonly varied diet. They feed on a wide range of cephalopods, including species of squid and octopus, as well as bony fishes such as sardines, tuna, Australian salmon, or even larger cartilaginous fishes such as stingrays and dogfish sharks. Younger sharks also consume certain types of jellyfish and crustaceans. Overall, the bronze whaler shark is quite intelligent, doesn’t take too many risks in attacking or rivaling with larger fish, and is capable of thinking constructively when hunting, members of the species usually being able to organize even larger groups in order to most efficiently hunt individual fish or even large schools of fish.