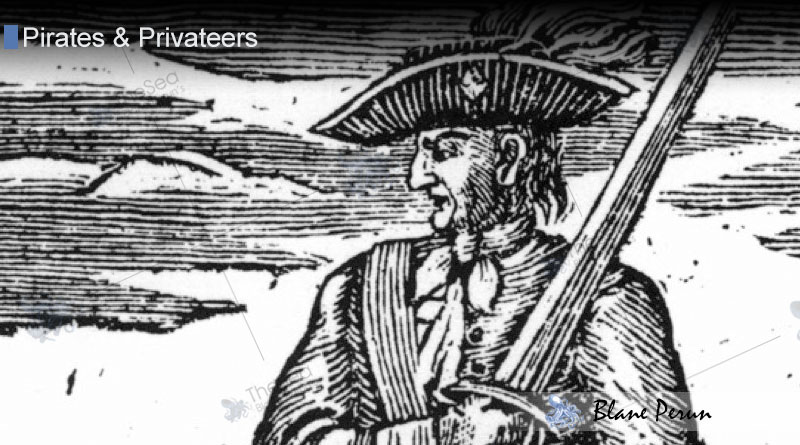 Calico Jack was an infamous pirate active towards the end of the golden age of piracy, whose two most important claims to fame are the adoption of the Jolly Roger pirate’s flag, (whose black background with a skull and crossed sabers motif has served to represent pirates even to the present day) and the adoption of female crew members who become infamous pirates in their own right. It is known that he was English in origin, although further details of his pre-pirate life have escaped documentation.

Having served on the sloop of the captain Charles Vane, Calico Jack was promoted to captain of the pirate ship during a stand off involving a French man-o-war that the pirate crew wanted to capture. Vane refused to attempt engaging the large and heavily armed ship, but the overwhelming majority of pirates felt that the gains to be made merit the risk, and Vane was deposed in the resulting mutiny. By the year 1719, Calico Jack was at the head of his own small fleet that he quickly enlarged with daring exploits in which he would capture larger and more heavily armed ships through the use of strategy.

One of the most intriguing characteristics of Calico Jack’s pirate career was the allowance of women aboard his ships, although this took place in two separate situations: Anne Bonny eloped with the captain and joined the pirate crew, while Mary Read joined under the disguise of a man and was only later forced to divulge the secret of her gender to those onboard. Both of these women became famous and respected pirates in their time, tied to the successes of Calico Jack in the Caribbean waters.

In 1720, the Governor of the Bahamas declared Calico Jack to be a top priority for pirate hunters in the area, and the pirate hunter Jonathan Barnet soon thereafter captured his crew. Barnet captured the crew in one fell swoop, while they were drunk, at anchor in Bry Harbour Bay, Jamaica. In the following month, Calico Jack was sentenced to hang along with the rest of his crew, save the two women who pleaded for a stay of execution on account of their pregnancies. By 1721, the crew had been legally executed and Calico Jack’s career of piracy was put to its end.