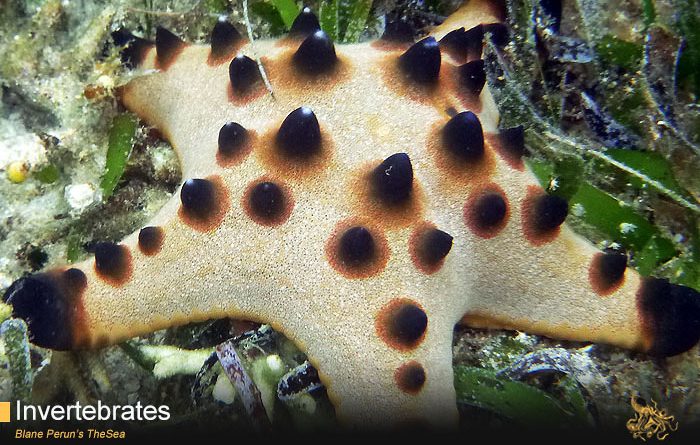 The unique texture and colorful appearance of the chocolate chip sea star is something to be admired. Aptly named due to its brightly colored body and dark, protrusive horns, which make it look almost exactly like a star-shaped chocolate chip cookie, this creature stand out as one of the more visually appealing starfish in the Indo-Pacific. The species is known as Protoreaster nodosus in the scientific world, but, commonly, it is called either a chocolate chip starfish or a horned sea star.

P. nodosus’ spines are arranged radially, in concentric circles on its disc-shaped body and extending outward in a single row associated with each of its limbs. Almost artistic in appearance, the horns actually serve a crucially practical purpose: that of warding off possible predators. This isn’t necessarily achieved through the horns’ resilience to attack, but due to their aggressive and threatening appearance. The starfish also has tube feet on its ventral side, which are either pink or purple in color. As for the sea stars’ bodies themselves, they can be colored in a variety of different hues, ranging between bright red and yellow.

The bank stretch of coral sand or the space between the leaves of seagrasses are where you will normally find the chocolate chip sea star exercising its role as an opportunistic carnivore. Hard coral, sponges and sea urchin are among the most common types of animals to feature on the sea stars’ menu. The species lives intertidally, for the most part, but can also be exposed to low tides for brief periods. Peculiar behavior traits were also observed, with large numbers of the species’ members gathering on the soft seabed on occasion for no apparent reason. Scientists believe this action serves to improve the already high chances of fertilization during the spawning process. Female chocolate chip starfish are known to produce more than 65 million eggs during each spawn.

You’ll find the starfish in sandy and muddy lagoons, on seagrass beds or even on reefs. The species prefers back reef areas, and juveniles can be found in waters that don’t exceed 2 meters in depth. The chocolate chip sea star is a widespread species that has been studied closely for the past 250 years and can be found most often in the waters of the Indian and Pacific Ocean, as well as in numerous sea grass areas within the Red Sea.