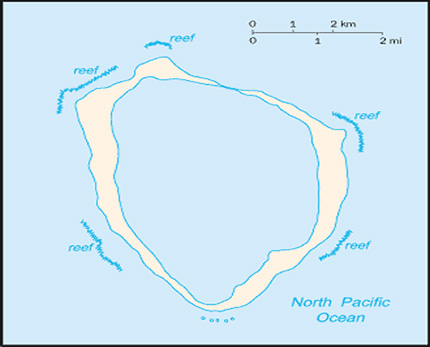 Clipperton Island is actually an atoll, one of the many coral atolls in the South Pacific. An atoll is a ring shaped coral reef. These encircle a lagoon (partially or completely) and are often situated on the rims of an extinct volcano, although sometimes it can be a seamount. Most of these coral atolls are mostly confined to the central and western areas. Most of the other regions are quite empty, with maybe the exception of Hawaii, Easter Island, Pitcairn, Galapagos and the Aleutians. Vast regions in the north and east Pacific feature almost no island in sight, and this is why Clipperton Island stands out so much. It is a beautiful coral atoll, standing all alone in the vast ocean, approximately 965 km off the Mexican south coast.

The atoll is surrounded by a shallow barrier reef, with steep walls in some areas, making you feel you they are dropping into an abyss. The reef offers excellent opportunities for divers, due to the rich life it harbors. There are over 100 species of fish here, including the endemic – and incredibly beautiful – Clipperton Angel fish, large schools of jacks, and the fascinating moray eels. Sharks and manta rays are not a very common sight, but they are there, nonetheless, so lucky visitors may get the chance to catch a glimpse of them.

Divers’ reports state that exploring the north part of the reef will give you a better chance to spot giant manta rays, as well as swim among bottlenose dolphins.