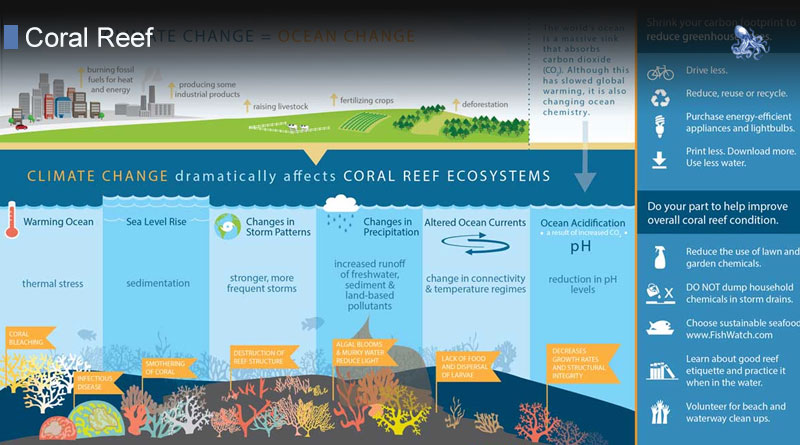 The problem of global warming causing coral reef bleaching is certainly not a new one. The climate change that the planet has been experiencing in recent years affects coral reef populations in several different ways, leading to their overall weakening, structural damage, disease and higher vulnerability to factors such as changing water currents and ocean waves of increased intensity. While detrimental fishing practices and pollution have also been factors to think about, global warming is the single most influential cause of coral bleaching, as shown by the two recent bleaching events affecting the Great Barrier Reef in 2016 and this year, and many smaller events documented throughout the world between the year 2000 and 2010.

One of the main problems that lead to global warming causing coral reef bleaching is the indirect effect that climate change has on the fragile ecosystem of coral reefs through unpredictable weather. While the Earth’s weather used to be relatively stable for thousands of years, the recent erratic weather patterns due to the changes caused by global warming worldwide have caused storms that are stronger and more frequent, changes in precipitations, the runoff of freshwater sediment, the increased acidification of the Earth’s ocean water and a damaging change in connectivity between established ocean currents. These factors can all lead to the structural damage of coral reef formations or an increased likelihood of contracting diseases that could even kill a large number of coral populations even on the healthiest of reefs.

Since the 19th century, ocean temperatures have been steadily rising, now getting close to a difference of more than 0.1 Celsius degrees at a depth of more than 700 meters. The rate of the oceans’ increasing warming has been about 0.13 degrees per decade, and since 1901, thermometers now point to temperatures of 2 C degrees higher. This relatively small difference is already causing the most fragile, endangered and vulnerable species of coral reefs to begin disappearing, and experts estimate that it could be the leading cause of coral reef bleaching during the next 50 years.

New research shows that sea levels are rising at an accelerated rate, and recent measurements have pointed out that rate to be 13% higher than expected. What does that mean for coral reef bleaching? With higher sea levels, reefs are getting less access to vital sunlight. Also, combined with increased water temperatures, a higher water pH and greater concentrations of carbon dioxide, the issue of global warming causing coral reef bleaching is intensifying by creating widely fluctuating and changing ocean conditions that many coral reef species simply can’t adapt to.