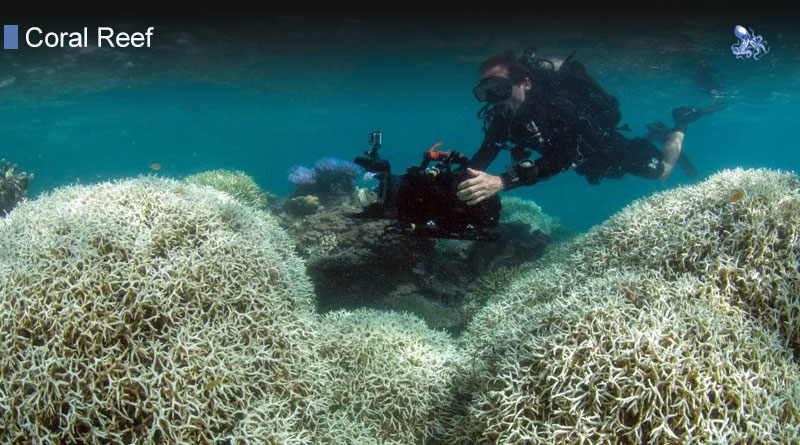 How does coral reef bleaching affect humans, and what are the environmental components of these concerns? While the environmental effects of bleaching are clear, people sometimes have the illusion that none of that will affect them. However, experts estimate that the loss of even 1km of coral reefs to bleaching can cost the economy in the area as much as $1.2 million, affecting tourism and fishing in particular.

Local populations in countries like the Philippines, Malaysia and Indonesia rely heavily on fishing for their sustenance, export and obtaining rare specimens and materials used for decorative purposes or in manufacturing. As coral bleaching continues to destroy coral populations in areas where fishing is an integral part of the local economy, the extinction or endangering of hundreds of species of fish and marine mammals can lead to a significant reduction in vital food and resources. As a result, entire countries can be affected, along with the countries they trade with.

If the fishing industry suffers, it can mean the loss of billions of dollars worldwide. But how does coral reef bleaching affect humans and what are its most significant impacts on the economy, aside from fishing? Tourism is also an important part of the picture, since millions of people and businesses thrive from providing tourists with beach access and opportunities like diving, chartering and various tours. With coral bleaching on the rise and coral reef formations affected by increased ocean acidity, reef barriers are no longer able to hold back stronger currents and waves from affecting the shoreline. Sandy beaches and pristine bays can become wastelands without corals to watch over them, which can significantly impact tourism in the future, if action is not taken to stop it.

Although a lot of people don’t think that far ahead, the reality is that, as a species, we have to consider the impact that coral reefs might have on our children, grandchildren and further descendants. In the long run, coral reef bleaching can potentially lead to the death of all coral populations in the world. When that happens, millions of species of marine life will die off as well, leaving much of the ocean a barren wasteland. Also, bleaching can impact the acidic properties of the world’s ocean by significantly reducing their pH levels. The question of how coral reef bleaching affects humans in this regard is clear, as a highly acidic ocean combined with huge tidal waves and weather anomalies will likely make life near most of the world’s coastlines almost unbearable.