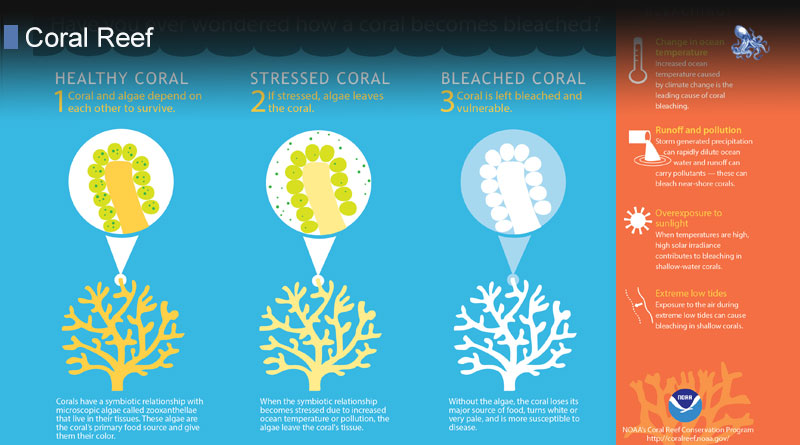 What is bleaching in coral reefs and what should you know about it? The process of bleaching is by far the most problematic cause of the rapid decline in coral reef populations worldwide. Bleaching can occur at any time when corals are subjected to temperature fluctuations or changes in the quality of the water they reside in. Aside from water pollution, ozone depletion and global warming have been seen as one of the major recorded causes of coral bleaching.

What is bleaching in coral reefs and what are the main components of the process? The answer to this question has to do with basic microbiology. Coral polyps live in a symbiotic relationship with a type of marine plankton known as zooxanthellae, and they rely on this algae for nutrient production. During the bleaching process, the zooxanthellae start to pale, their photosynthetic pigments fading, and their densities gradually start to decline. Corals can lose up to 90% of their symbiotic plankton as a result of coral bleaching. During the process, the coral polyps themselves are greatly affected, and if the conditions that have led to coral bleaching aren’t reversed, the corals can die.

Ozone depletion and the increase in UV radiation from the sun is also partly responsible, and the increase in water temperature in many tropical regions was most closely related to coral bleaching. However, many other events could also be potential causes, depending on the area where the reefs are situated. Coral bleaching can be caused by fresh water dilution and the introduction of foreign, inorganic nutrients and compounds that are usually result from pollution and destructive fishing practices. Sudden exposure to air during extremely low tides and a sudden drop in water temperature can also worsen the problem.

What Is bleaching in coral reefs and how does it develop depending on specific oceanic regions? Also, when did coral bleaching become a problem in the first place? It has been known for some time that water pollution and climate change – which is also believed to be caused at least partly by pollution – have had the greatest impact on diminishing coral populations over the past century. Environmental problems seemed to have impacted tropical waters the most, leading to heightened water temperatures responsible for killing off coral reefs in many geographic areas in the 1980s. So, ultimately, the question how bleaching occurs in coral reefs can be answered by pointing out the impact of global warming over the past few decades and the fragile ecological balance necessary for coral reef survival in most tropical and subtropical waters.