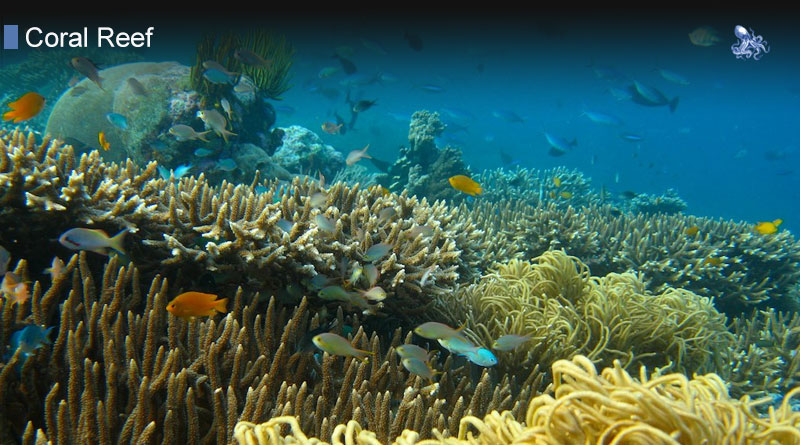 Coral reef ecosystem animals are still thriving. Despite being threatened by rising water levels and temperatures, human factors and a host of other potential stressors, some of these creatures thrive quite well in their respective habitats. Looking at the most unusual and fascinating of these animals, we find that there is virtually no limit to the huge diversity associated with coral reefs ecosystems.

The butterfly fish is one of the most beautiful coral reef ecosystem animals in existence. Aside from its unique stripes and colors, however, it’s worth mentioning that the butterfly fish is a corallivore, being forced to live near the reef and feed on coral polyps. Another unique fish species living in coral reef ecosystems is the clownfish living in a symbiotic relationship with its host anemone. The crown of thorns starfish is even more unusual along with the colorful humphead maori wrasse, which is only found on the Great Barrier Reef, off the coast of Australia. You can also see many other strange and unique types of fish as you dive near coral reefs, including cuttlefish and parrotfish species, guitarfish and the large potato cod, which is usually found near the northern end of the Great Barrier Reef.

Whales, dolphins and whale sharks are also among the most interesting coral reef ecosystem animals you can find in the ocean. These large and majestic creatures are sea mammals that have evolved to be remarkably intelligent. In the case of dolphins, high emotional intelligence is one of the most fascinating trait that scientists have discovered. Whales and dolphins are carnivore creatures surviving mainly by eating fish that make use of coral reef habitats or regularly visit coral reefs in order to feed. Sharks can also be found close to coral reef formations, especially hammerheads and reef sharks and whale sharks. The latter is the largest species of shark in existence, yet it’s also among the most docile, gaining nourishment mainly by filter feeding on plankton, krill, fish eggs and copepods.

Species like the spiny lobster add color and character to coral reef environments, and are highly dependent on the protection of coral reef ecosystems, especially when going through molting – a time during which they are considerably vulnerable. Other unusual reef-dwelling creatures include clams, copepods, sea turtles and jellyfish. In fact, the largest known species of jellyfish, the lion’s mane jelly, is one of the most well-known species found in the vicinity of the Great Barrier Reef. Other strange coral reef ecosystem animals also include the giant clam, which can live for up to 100 years, and the gentle dugong, which is also one of the most endangered species on the reef.