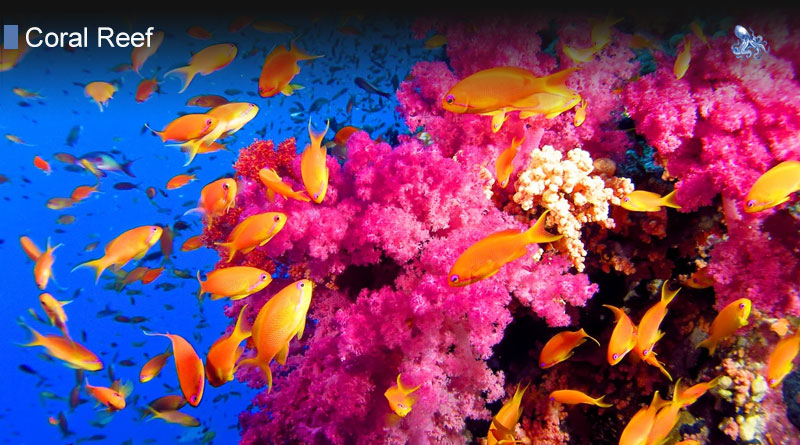 While scientists aren’t fully sure on the exact number, it is known that coral reef systems support over a million different species of marine life, regardless of whether it’s large or microscopic. Even larger predators come close to the reef to hunt, and many other marine creatures thrive by living on the coral reef itself and using it as a source of nourishment – usually by consuming marine flora, algae and other types of fish or marine creatures that have made their home on the coral reefs as well..

Some coral reefs can be impressively massive, and many support over a million different species of vertebrate and invertebrate marine creatures. These include both shallow water reefs and deep sea reef communities, some of which also support macrofauna and deep ocean fish species that not much is known about. Some accounts show that coral reefs form homes for about ¼ of all marine life species, offering food, shelter and resources to an estimate of about 1-3 million species. Some sources believe that about 200,000 of these species live in the Caribbean reefs alone, and areas in the Pacific, the Red Sea and other tropical and subtropical regions house even more species that are supported by coral reefs.

Coral reef systems support numerous species, but contrary to popular belief, many of these are microfauna, such as the coral polyps and zooxanthellae that are responsible for coral reef growth, as well as many other microscopic creatures and invertebrates. Invertebrates make up most of the species you’d find on or around coral reefs. They are usually species of sponges, crustaceans, mollusks and echinoderms. There are also many thousands of vertebrate species, including over 3,000 different species of fishes known to be supported by coral reefs, as well as 60-65 species of sea snakes and several types of sea turtles.

Corals create biodiversity based on three different factors: the types and number of zooxanthellae algae that support coral growth, the action of influencing currents and waves which determine how sheltered and isolated some coral reef habitats and ecosystems are when compared to others, and the interactions between reefs and various other types of ecosystems, such as mangroves and seagrasses. The protection and stability offered by these factors, along with the safety provided by the calcium carbonate layers that make up the reef, ensure that corals support over a million different species.