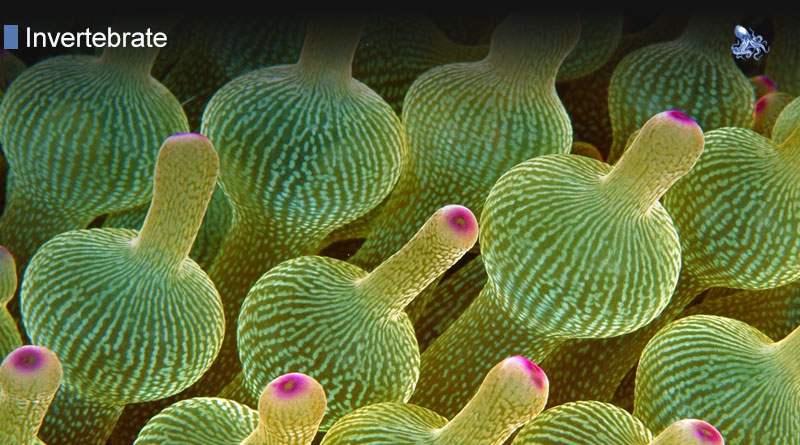 Entacmaea quadricolor, commonly known as the bubble tip anemone, is a beautiful predatory creature that lives attached to the substrate in the shallow waters of the Indo-Pacific region. These anemones prefer coral reef habitats, where they live in colonies or alone. They often become the preferred habitat for other species as well – anemones are known to live in symbiotic relationships not only with zooxanthellae algae, which help them get food, but also with small fish and crustaceans.

Entacmaea quadricolor individuals relatively small, the maximum diameter they can grow to being around 30 cm. The bubble tip is a sessile species, living fixed to the substrate with a strong foot, but like most anemone species, bubble tips can detach themselves from the substrate if it is absolutely necessary for survival. Out of the foot grow the tentacles at the end of which spherical or pear-shaped bubbles appear right under the tip. The bubble comes in various colors, from brown and pink to green, blue and purple. The number of the tentacles (and with the tentacles, the number of the bubble tips) keeps growing as the anemone ages – young individuals have only about 20 tentacles, while older ones might have hundreds of them!

These creatures are unable to move, and therefore they get the nutrients they need by filtering the water column and by using the help provided by microscopic algae and other species that live in, on and around them. During the filter-feeding process, the anemone uses its tentacles to snatch tiny food particles from the water. It also feeds on the debris it scrapes off the body of another of its symbionts, the anemonefish that is given shelter among the long, often stingy tentacles of the anemone. Another example of the symbiotic relationships the anemone engages into is with the microscopic algae that reside in the digestive tract – the algae find in the anemone the exposure to solar rays that they need for photosynthesis and the anemone is provided with oxygen, glucose, alanine and other nutrients that are the by-products of the photosynthesis.

Bubble tips can reproduce both sexually and asexually. This means that they can proliferate by cloning and they are also known to be spawners. The males and the females release their reproductive fluids into the water, and then fertilization happens in the water column, followed by the development of the free-floating larvae. Floating continues until the larva finds a suitable place to settle and to start growing into a beautiful bubble tip anemone.