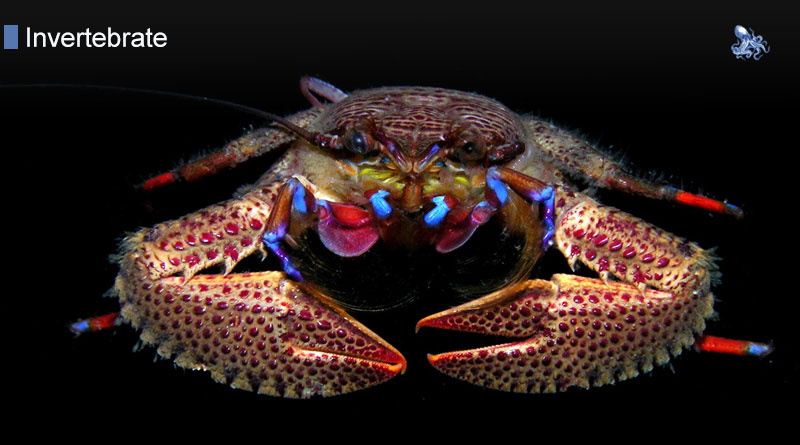 Arthropods are an unusual type of invertebrate featuring distinctive qualities, such as an exoskeleton, a segmented body and jointed limbs. The cuticle is made generally from chitin, while each segment comes with a pair of appendages. Marine arthropod species can include crustaceans, crabs and many other species that have evolved in a distinctive fashion, depending on the particular requirements of their environment.

To say that diversity is a common trait in the case of most arthropod species is an understatement. There may be hundreds of thousands of marine species, and scientists claim that they are far from documenting all of them thoroughly. Marine invertebrates form various sub-groups that are highly diverse, including crustaceans, Pycnogonida and Merostomata.

A curious trait that makes some species of arthropods distinctive among invertebrates is the presence of their exoskeletons. The creatures grow them for protection and support, but at a price: any arthropod that has grown an exoskeleton has its growth cycle halted. This means they basically cannot grow any larger than their current size, since the exoskeleton impedes the process. These clever creatures, however, have evolved a special process that helps them adapt to strange new environments and grow even further, by shedding their current exoskeleton, while growing a new one. This process is known as moulting and is extremely common in the case of most species, although they each use it differently in the most part.

Researchers in the mid-1900s have established that arthropod species are polyphyletic – which means they don’t have a single common ancestor that all species can be traced back to. Instead, they are divided into three groups that have gradually evolved, over time, into varieties sharing common properties and anatomic distinctions, while developing separately from worm-like ancestors. This curious spin on evolution resulted in several distinct species being responsible for the development of arthropod species that feature exoskeletons. New research conducted in the 1990s seemed to suggest that the species are closely related to an extinct genus of anomalocaridid, while scientists in the 2,000s concluded arthropod families are much closer to tardigrades and lobopods, rather than any type of anomalocaridid. Arthropod evolution is still an open debate overall, most scientists being unable to conclude exactly which species these invertebrates are actually based on.

The arthropod eye is one of the fascinating marvels of evolution. These species of invertebrates have compound eyes, and their placement, type and origin varies from one sub-group to another. The most common types of eyes found in arthropod species are compound apposition eyes, while some species have also developed simple eyes. The advanced visual abilities required by these invertebrates have led to the development of cyclopic and holoptic eye arrangements. These are prevalent particularly in the case of marine arthropods that require advanced visual acuity and stereoscopic vision for navigating, catching prey and avoiding predators.