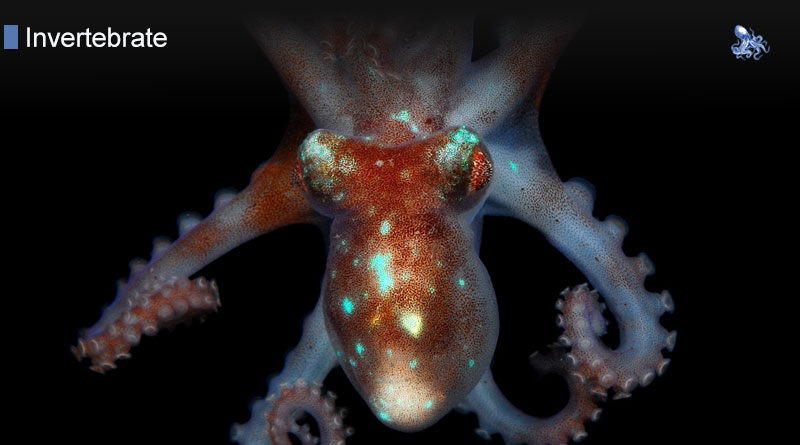 The Atlantic pygmy octopus, also known as the dwarf octopus, is the smallest mollusk in its order dwelling in the world’s seas and oceans. Found mainly around the Cayman Islands, these tiny creatures prefer warm and shallow waters where they live hiding in the substrate or camouflaged – they are actually so good at blending into the environment that there may be hundreds of them present in a very small area at a time, yet most of them will go completely unnoticed. Though small and shy, the pygmy octopus is by no means defenseless: like other, larger octopus species, the pygmy octopus also has an ink sac that releases dark colored ink when the animal feels threatened or is provoked. They are also known to be intelligent and playful, but unsociable creatures.

In adulthood, the largest members of the species reach the maximum length of 5.3 inches, out of which the length of the tentacles is over 3.5 inches. They weigh around 1 ounce when fully developed. The body of the dwarf octopus is white with brown spots, but due to the animal’s ability to blend into the surroundings, the body can become of any color.

Atlantic pygmy octopi are carnivores, feeding mainly on tiny clams and mollusks. They deliver a fierce attack on their victims, breaking through their shells and paralyzing them with poison released in the form of saliva. They are voracious, consuming large quantities of food, but they are picky, too, looking for and feeding on the same type of crustacean all the time.

The mating season of the Atlantic pygmy octopus is in spring, usually in March or April and the process cannot be weirder. The body of female individuals start secreting a special scent that informs the males about their availability. The male then gives the female a sperm sac that gets introduced into the body of the female. Once the sac is successfully transferred, the males leave, and then they die after a few weeks. The female’s eggs get fertilized with the help of the contents of the sac inside the female individual’s body, then the tiny juvenile octopi are released into the water. Newborns become able to swim and hunt within a few hours after they are born, but Atlantic pygmy octopus individuals take about half a year to reach adulthood and to start reproducing.