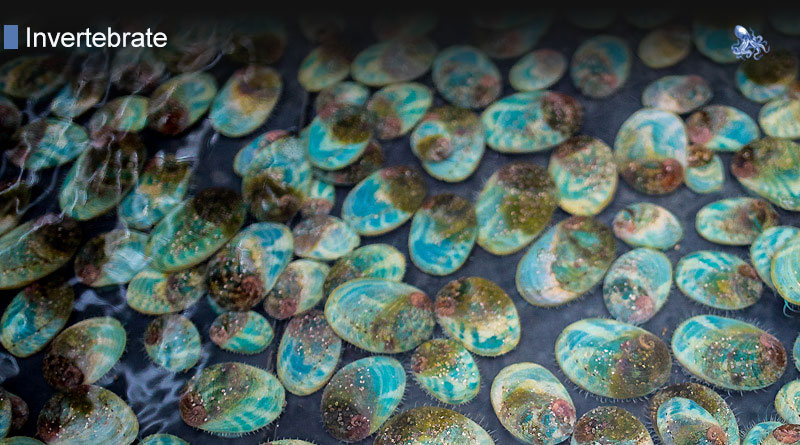 Abalone is the common name used for referring to over 50 species of marine mollusks, some of them tiny, others large. Abalones have an almost worldwide distribution, being found mostly in the shallow cold water areas around every continent. There are only a few exceptions, such as the Pacific coast of the South American continent, the East coast of the US, the icy Arctic waters and the coastal waters of the Antarctica.

Abalones vary considerably in terms of size, but they all share distinctive physical features. The soft body of the abalone is protected by a hard and strong, convex, in most cases ear-shaped shell that also accommodates a row of pores used by the animal for breathing and for releasing eggs and sperm into the water. The animal attaches itself to rocky surfaces with the help of a strong and muscular foot that protrudes from the shell and is surrounded by the internal organs. Abalones have two eyes, a mouth with a tongue, a gill chamber that draws in water and a heart on the left side that pumps blood through veins, arteries and sinuses.

Abalones feed mainly on marine algae, especially brown algae such as elk kelp, bull kelp or giant kelp. The animals spend most of their time attached to the substrate, waiting for algae particles to drift by in the water – suitable pieces are scraped with the help of the strong tongue and transmitted to the animal’s digestive tract. Despite their “sedentary lifestyle”, abalones are able to move and they do seasonally or even daily if they need to follow their food.

Male and female abalones have differently colored reproductive organs on the side of their shell – female individuals have a green organ, while the male organ is beige. During the reproductive process the male and female individuals will broadcast their reproductive fluids into the water column, fertilization taking place outside their bodies. The factor that triggers the process is not known, but when one individual starts spawning, all the others in the area follow suit. The fertilized eggs develop quickly into larvae that float freely in the water for 1-2 weeks, after which they sink to the bottom to test the substrate and to find a suitable spot to attach to. Young abalone individuals prefer places where they can find plenty of coralline algae, for that is their favorite food at a young age.