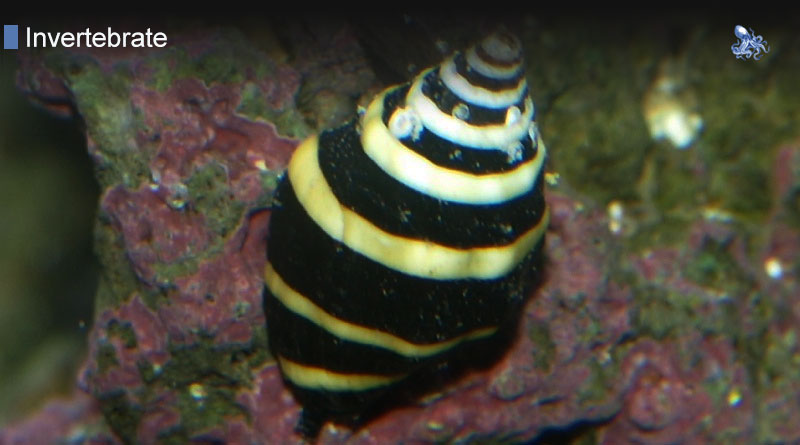 The bumble bee snail, also called wasp snail, derives its name from its spectacular appearance: both the body and the shell of the snail feature yellow and black stripes organized in a pattern that resembles the pattern seen on bumble bees. Found in the Red Sea and in the Indo-Pacific region, these carnivore snails thrive equally well on rocky and on sandy surfaces, provided that the water is sufficiently warm.

The bumble bee snail is small, shell sizes varying between 1 cm and 3 cm (0.4-1.2 inches). The black stripes, displayed on the spiral coiled shell against a yellow background, vary in width – some individuals have wider black stripes, while in others, the yellow bands are more dominant. Some of these snails have sharp spikes protruding from their shells to protect the animal against attackers. They are nocturnal creatures and also very shy – they would spend most of their time hiding among rocks or in crevices, sheltered from predators and strong currents.

These snails are predominantly carnivorous and scavengers, feeding on the protein-rich detritus they find on the substrate, but they would occasionally feed on plants, too, if protein-rich food is not available. They are also known to provide excellent cleaning services as they feed on algae build-ups found on the surface of rocks or plants. These tiny striped creatures are sometimes referred to as assassin snails for their habit of attacking and killing other, sometimes considerably larger snails – the strategy used for killing such larger prey is to hide in the substrate, then to ambush the victim.

Unlike many other snail species, bumble bee snails are not hermaphroditic. Marine scientists believe that wasp snails are sexually dimorphic, but no distinctive physical features have been discovered yet for the sexes. During mating, the male and the female lock tightly together for relatively long periods of time, in some cases for as long as 12 hours, then the female lays egg capsules about 1-1.5 mm in diameter on solid surfaces. Each capsule contains one egg that hatches after a few weeks, the length of the incubation period depending on the amount of minerals available in the water column. The young bumble bee snail is able to support itself, but is still very fragile, therefore it burrows in the substrate until it reaches maturity, which takes about half a year.