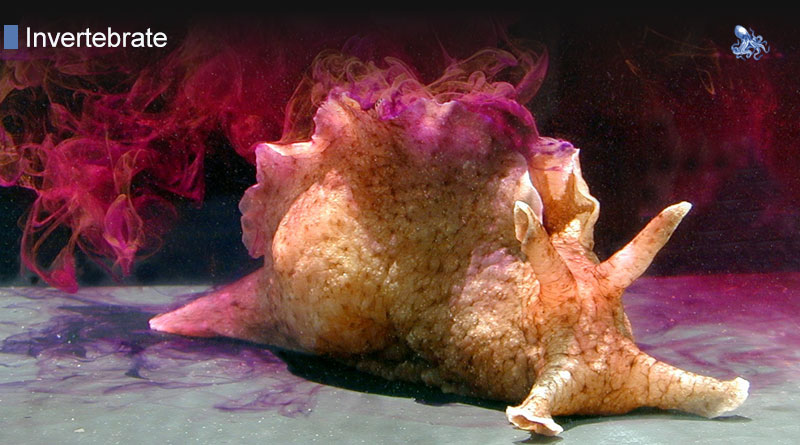 Named after the two ear-shaped protrusions worn by this creature on its head, the sea hare is a family of large marine slug species widespread wherever conditions are suitable (namely, where the water is sufficiently warm and shallow and the substrate is sandy). It can be found especially in intertidal areas that are not deeper than 20 m and in areas with lots of seagrass. Known and described by the ancient Greeks and Romans as well, sea hares are among the longest studied mollusks of the seas.

Sea hares are large slugs, with length varying between 20 cm and 70 cm, the largest individuals weighing over 10 kg. They have no external shell, but they are not defenseless: they have an internal shell that protects their animal’s vital organs. The color of the body depends on the diet available in the sea hare individual’s habitat. Though they have eyes, they cannot see – the eyes are able to distinguish only darkness and light. However, these slugs have an excellent sense of smell, able to locate food from long distances. This large slug prefers to crawl and slide on the substrate, but it can also swim if necessary. Some species move by jet propulsion. Most of these slugs protect themselves by releasing ink to deter predators.

Sea hares are herbivorous, feeding mainly on the seaweed they find. Their color is determined by the color of the seaweed they eat, but they are usually olive, greyish or dark brown, with black lines and rings. They also produce their dark purple ink using a concentrate of the pigments they ingest with their food.

Sea hares are hermaphrodites, each individual having completely developed male and female reproductive organs. The male organ is on the right side of the head, while the female organ is located inside the mantle cavity, underneath the shell. Sea hares have very strange habits when it comes to mating: at the beginning of the mating season, several sea hares gather to form a circle, each hare fertilizing the one in the front – the animal in the rear is always male and the ones in between are male and female at the same time. One hare is able to lay over 500 million eggs in one mating season. These slugs are not long-lived – most sea hare individuals live for only around a year, though colder temperatures can extend their life span.