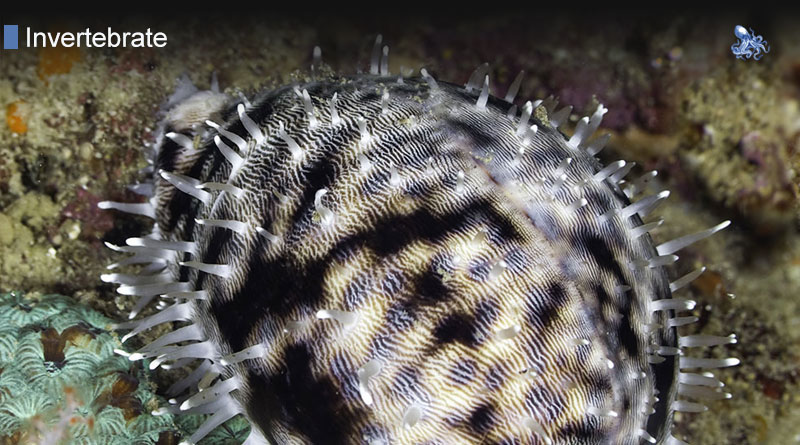 Cypraea tigris, also known as the tiger cowrie, is a species of marine snails widespread in the Indo-Pacific region, especially around Africa, Polynesia, Micronesia and Australia. They prefer shallow water areas not deeper than 40 m, especially live coral reefs, sandy substrate and seagrass meadows where food is plentiful and there are a lot of hiding places as well.

These cowries are large, reaching up to 15 cm in length in adulthood. The upper part of the thick and heavy shell is usually whitish, covered in brown or black spots, while the lower part is white. The surface of the shell is polished and smooth, with a toothed opening. The large mantle of the tiger cowrie is of a golden yellow color and has two extensions on the two sides that can be spread to cover the entire shell, but only when the animal feels safe – when threatened, the mantle becomes completely withdrawn into the shell. The mantle accommodates the cowrie’s organs, with the tentacles and the mouth used for foraging visible when the animal is active. The mantle has papillae that look like tiny spears – they are used during the feeding process as well as for camouflage, when the mantle is completely extended to cover the shell. The cowrie also has a special organ that secretes a mucus that helps the body slide on the shell while the animal is out looking for food and it is also responsible for keeping the surface of the shell polished.

Juvenile tiger cowries are herbivores that feed on algae and seaweed, but in adulthood they mostly feed on tiny crustaceans and other invertebrates, even on corals. They eat during the night, moving around the seabed slowly, grazing. The animal uses its radula, a sharp, tongue-like organ to rasp the algae off the corals and the rocks in its habitat.

Cowries have separate sexes and fertilization takes place internally, inside the body of the female. After the eggs are fertilized, the female finds a suitable spot of substrate and lays a cluster of egg capsules. She broods on the eggs until hatching – behavior that is completely unusual among marine snails and probably accounts for the high survival rate of young tiger cowries. The eggs hatch into planktonic larvae that float freely before choosing a spot to settle on and to continue their life as adult tiger cowrie individuals.