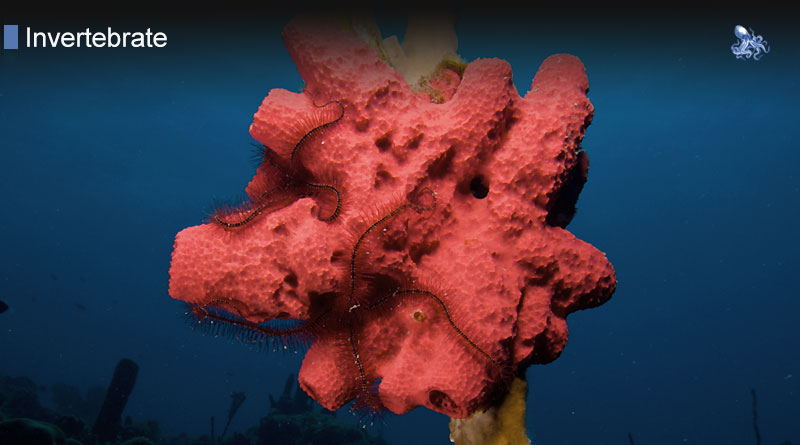 The vase sponge is a family of medium sized sponges named after their vase-like shape. Common in the Indo-Pacific, especially in coral reef areas up to around 26-27 meters where they can live on walls, these sponges are frequently found living in areas populated by sponge brittle stars. Most of these sponges are solitary, living alone, but sometimes they form small groups, with one main tube and a few smaller, secondary tubes. Their lifespan varies from a few months to over two decades, depending on the species and on the living circumstances in the habitat.

Vase sponges are among the most colorful creatures in the world, the hues they display ranging from blue to pink, purple and red. Most species in the family have bumps and ridges on the exterior surface of their tube, usually 0.5-1cm high, but all of them have smooth interiors. Vase sponges vary in size from a few cm to over 20 cm in height.

Vase sponges are sessile, they spend all their life anchored to the chosen patch of substrate, therefore they need to obtain the nutrients they need from the water around them. They collect plankton and other food particles from the water, storing nutrients inside the vase tube. The water drawn in is filtered, then expelled through an orifice. Vase sponges can control the quantity of the water that passes through their body by closing the intake orifices.

These sponges, like many other species of sponges around the world, are able to proliferate both sexually and asexually. Asexual reproduction takes place by means of budding, a process during which a small part of the vase breaks off and floats in the water until it settles and grows into a new sponge. The process of sexual reproduction starts with the development of the unfertilized egg inside the parent body. When the eggs are sufficiently developed, sperm cells get released into the water and then introduced into the same parent body and the eggs are fertilized internally. The eggs also hatch internally, into larvae that have a flagella, a tail-like appendage that they use to leave the body of the parent. The larvae swim to find a place suitable for settling and when they find the right place, they start developing into new, colorful vase sponge tubes.