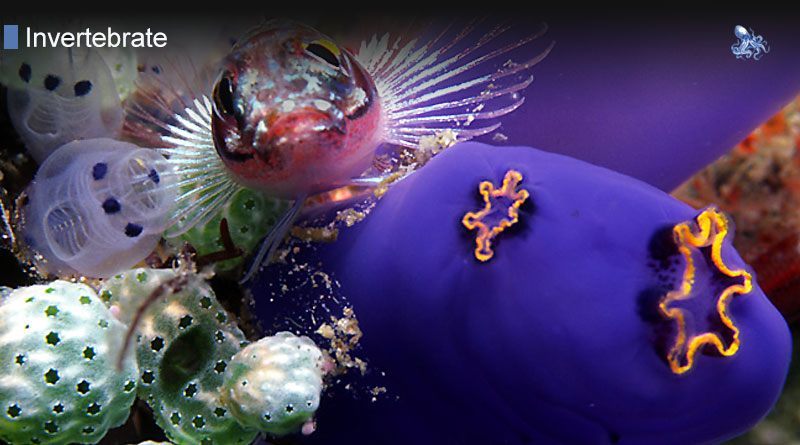 Tunicates are small invertebrates to be found in numerous seas and oceans of the world, many of them living not only on rocks, but also on the underside of ships and boats. Also called sea skirts, these tiny invertebrates are very much studied by marine scientists to find out more about their strangely close genetic kinship to vertebrates – according to some specialists, they are even more closely related to vertebrate species than humans.

These special creatures were named after the way they look: they have a barrel-shaped body covered in a flexible, but very firm tunic. Their body shape makes them incredibly resilient – sea skirts have been found unharmed even after the wildest storms, even after tsunamis. They fix themselves to the substrate or to the rocks and ships with the lower part of their tunic and they have two tube-like organs called siphons protruding from the tunic, too. The animal uses one of the siphons for filtering the water in order to extract nutrients, while the other siphon is used for expelling the filtered water. Many tunicate species have almost completely translucent or whitish bodies, while others are colorful and can be brown, red or yellow.

Sea skirts have clear blood and a heart that behaves strangely, too. The circulatory system of these small animals has also surprised marine biologists: the blood circulates in one direction in the body for 100 beats of the heart, then the heart stops, starts again and pumps the blood in the opposite direction. The reason for the phenomenon is unknown.

There are more than 2,100 species of sea skirts known to scientists today, most of them living in shallow waters, usually not deeper than 200 meters. Most of them are solitary creatures, living sessile lives, permanently attached to the substrate or object they choose, but some are known to be colonial or pelagic.

Most sea skirts are suspension feeders, meaning that they capture food particles such as microscopic planktons by filtering the water around. However, some species are detrivores, obtaining the nutrients they need from the decomposing particles of plants, animals and feces they find in the water, and others are known to be predators, sitting around and waiting for tiny crustaceans to swim by.

Most tunicate species are hermaphrodites, having a single testis and an ovary. They employ two methods to avoid self-fertilization: they either have the sperm and the eggs inside their body mature at different times or they use chemicals to make the egg and the sperm reject each other. In solitary species, reproduction occurs through external fertilization – the eggs and the sperm are released into the water where they combine, after which larvae emerge and swim freely. Other species, especially colonial ones, reproduce by sperm being released into the water and drawn by others into their bodies, where the fertilization takes place.
There is one species of sea skirts, the Oikopleura dioica, that reproduces only once during its life. These tunicates are also the most studied members of the whole group, considered by many experts to be a model species, its genetic material bearing a striking resemblance to the genetic material of vertebrates.