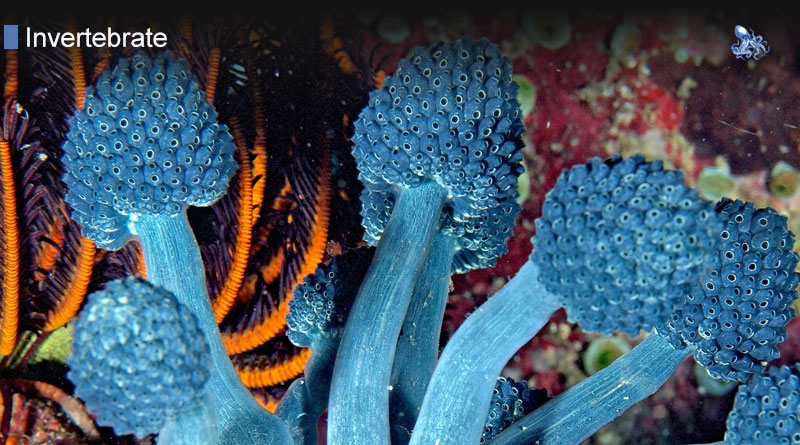 The blue lollipop tunicate goes by many names, all of them referring to the creature’s appearance. Often called blue cauliflower corals or lollipop corals (even though they are not corals), these beautiful creatures live in colonies in the shallow waters of the Indo-Pacific region, especially around Indonesia. They prefer waters that are rich in nutrients such as planktons and bacteria, where they can satisfy their enormous appetite.

The body structure of blue lollipops is similar to the structure of other tunicates – they have thick stalks that are attached to the substrate and support the head of the tunicate. The head is actually not a homogenous part – it is composed of many small polyps called zooids. The name tunicate derives from the presence of a thick, hard and leather-like skin that looks like a tunic worn by the animal. Blue tunicates live in colonies – in many cases, as many as several thousand zooids join to form smaller or larger mounds.

These bright-blue colored critters belong to a class of tunicates called ascidians – bottom-dwelling tunicates that are firmly attached to the substrate and are unable to move. They are filter feeders, which means that they feed on the nutrients they filter out from the water column. They take in water through a tube-like organ on the upper part of the body called the oral siphon, then the water passes through the animal’s mouth and gill slits where it gets filtered by the sticky mucus inside that traps small food particles and then it is eliminated through the atrial siphon, also found on the upper body.

Blue tunicates, like most other ascidians, are hermaphrodites, meaning that each individual has both male and female reproductive organs. Individual tunicates release their reproductive fluids into the water column, where fertilization takes place. Blue tunicate larvae float freely in the water until they find a suitable spot of substrate where they can settle. In the early stages of development, the larvae resemble tiny tadpoles and they have a rod-like notochord – feature that accounts for the blue tunicate’s inclusion into the phylum of chordates. However, the cord disappears in later stages of development, after the larva has found a place to attach itself to and the adult blue lollipop tunicate has no features that would make it look anything like an animal that once had a nerve cord.