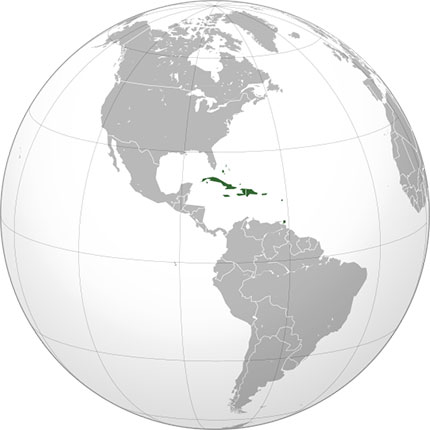 Coral reef in Aruba can be found in a handful of spots all over the island but possibly none better than Mangel Halto. There are two major reefs here, but to see the healthiest and most complete coral you will want to head to the outer reef which boasts tons of fish and hard and soft corals.

Located just over two miles from shore, the coral reefs of Barbados are known worldwide for being amongst the healthiest reefs in the Caribbean to date. Some of the very best spots to see some of these spectacular reefs on the island are at Bell Buoy, Bonita Bar and Bright Ledge.

Despite the fact winter water temperatures that are typically less than ideal for what corals need to survive, Bermuda is home to surprisingly healthy and beautiful coral reef year-round. Most of the reefs worth checking out are off the northern coast of the island and include Lagoon reefs, Rim Reef and Terrace Reef.

Bonaire is home to some of the Caribbean’s healthiest coral reefs, despite the bleaching issues that have doomed the area in years past. One of the reasons has been speculated to be the abundance of fish that litter the reefs, adding to their overall health and durability.

Once predicted by scientists to disappear completely, coral reefs in the Cayman Islands have made a remarkable recovery and bounced back to produce the vibrant colors and size they were once known for. The plethora of marine animals that litter the islands waters are said to have helped with this recovery.

With its borders now open for tourism, Cuba is expected to let the world see their abundance of beautiful and vibrant coral reefs. Given their limited exposure to tourists and general disruption for decades, Cuba’s reefs are said to be spectacular and amongst the healthiest in the world.

Beyond the reefs that litter the shores of Curacao, the large bays located on the island feature some of the best coral reefs in the Caribbean. Home to mangrove and sea grass ecosystems, certain types of reef fish found nowhere else in the region can be found here.

Home to three marine reserves that have largely reduced the impact on corals of the region, Dominica has a growing diving industry in large part thanks to their beautiful coral reefs. The healthiest coral reef is located just a few hundred meters off shore making this a great snorkeling destination.

Featuring sand patches and spectacular canyons of coral reef, Grenada is a premier spot for coral reef diving. Home to creatures such as Zoanthids and Morray eels, the reefs that sprinkle the island provide a healthy dose of coral and marine life.

The best reefs in the Grenadines are located on the eastern coast at Tobago Cays, Mayreu, and Union Island. Just like many of the other islands in the Caribbean, the reefs here, specifically the Horseshoe Reef is definitely boosted thanks to high activity from the sea creatures in the region.

Guadalupe is home to a plethora of elk-horn and stag-horn shaped coral colonies as well as an abundance of various sea weeds that make it unique and healthy year round. These spectacular sea gardens are some of the best underwater sites in all of Mexico.

Due to population growth and over fishing of the area, Jamaica’s coral reefs have taken a hit over the years. Thanks in part to a new restoration project, the immense range of marine life and species of coral is on the rebound and is starting to become the beautiful underwater world it once was.

One of the unique aspects of Martinique coral reef is the sheer volume of colors you will see throughout its reef ecosystem. Another anomaly of this islands marine species is a plethora of sponges not found elsewhere in the region. Among them include the barrel sponge which are some of the largest in the world here.

The crystal clear waters of Montserrat are home to many unique and interesting species of fish found nowhere else in the world. Thanks in large part to the government, the luscious and vibrant coral reefs on the island are now getting the attention and restoration that they need following a volcanic eruption in 1995.

The western side of Saint Kitts has been well protected over the years and features incredible visibility providing for great snorkeling and diving of the island’s reefs. For some of the healthiest and most colorful reefs, check out Blood Bay Reef, Black Coral Reef and Coconut Tree Reef.

Growing as veneers on top of volcanic rock, St Lucia is home to an abundance of marine protected areas that provide great protection and longevity to the reefs that litter their waters. After a handful of storms in the late 90s, St Lucia coral reefs have recovered spectacularly and are a can’t miss in the Caribbean.

One of the best parts of checking out the underwater world of coral reefs in St Vincent is the stellar visibility thanks in part to the volcanic geography of the island. Between walls of coral reefs and a handful of interesting ship wrecks covered in soft corals, St Vincent reefs provide a unique diving and snorkeling experience.

The crystal clear water of the US Virgin Islands provide for a great viewing experience of their abundance of healthy and vibrant coral reefs. One of the features the ecosystem here is known for is the plethora of sponge species found in the islands, as well as corals in a mangrove ecosystem which is considered to be rare.