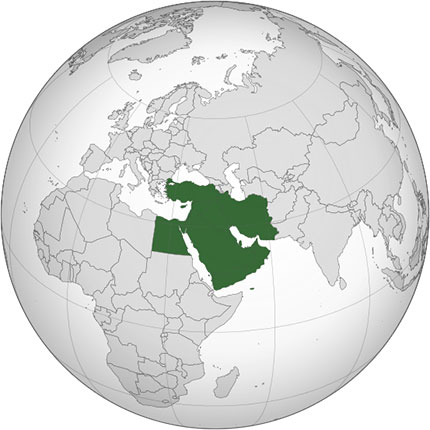 With its coral reefs mainly distributed along the northern and north eastern coastlines, the coral reef system in Bahrain contains nearly 30 species of coral, including 25 of which are hard coral species. Thanks to inappropriate engineering and excessive sedimentation, the coral reefs of Bahrain are in grave danger as of recent.

Dominated by Acropora hemprichi, Echinophora fruticulosa and Porites nodifera, this Horn of Africa country is home to approximately 167 coral species. Here you will find some of the best spots to dive in all of the Middle East at La Vierge Rougue and at Sec-de-la-Passe just outside Goubbet.

The coral reefs in Egypt are found primarily along the coasts of the Red Sea, the Gulf of Aqaba and the Gulf of Suez. Home to over 1000 species of fish and 250 varieties of coral, there is no shortage of marine life in this widely considered desert oasis.

When it comes to coral reef in Israel, the city of Eilat is where you will want to head. The deep blue waters of the Red Sea just off the shores here is home to some of the most beautiful coral reefs in the Middle East. From deep canyons to majestic fish and various species of coral, this site will not disappoint.

In the northern Persian Gulf the city of Kuwait is home a great collection of coral reefs. With maximum depths of around 10m, the diversity of coral diversity here does not disappoint. Just off the shores of Kuwait, you will find a few small islands that are completely surrounded by coral.

Coral reef systems in Oman are limited to southern coastlines at the city of Dhofar. More specifically, the islands of A’Sadw, Al Hallaniyah, Al Qiblah are home to the primary source of the scattered corals, located under a thick algal canopy. If staying on the mainland, check out some of the bays for coral reef growth.

While the warm sea temperatures off the coasts of Qatar pose well for beach goers, they have been devastating to the local marine life. Already having caused the death of over 20 types of fish, the coral reef in the area is at grave risk as well. One of the more prominent reefs in the area, located near the capital Doha, is especially at risk.

While the entire western coast is coral reef fringed running along the east coast of Saudi Arabia, the best place to see coral in the country is the central-southern region stretching from Jeddah to the Yemen border, which includes the Farasan Bank and Islands.

Coral off the coasts of Yemen in the Red Sea range widely in variety and size. From stony corals dead corals, soft corals and various species of algae, there is no shortage of different types of marine live to view of Yemen’s shores.