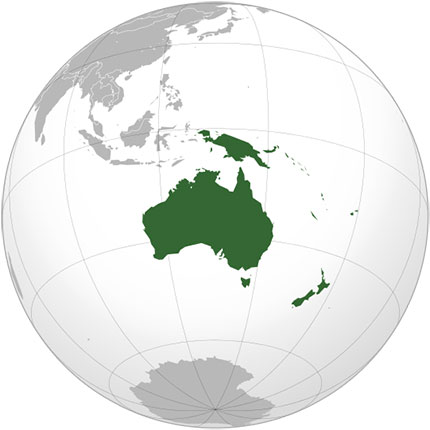 Widely considered the most popular coral reef system in the world, Australia’s Great Barrier Reef is the far and away the largest. Covering an area of approximately 340,00 square kilometers, the reef is located in the Coral Sea just off the coast of Queensland. The Great Barrier reef it is on a very short list of things that can be seen from outer space.

Located out in the Pacific ocean over 1,500 miles off the coast of south-west Mexico, the Clipperton Island is an inhabited island with a an area of just 6 square kilometers. Officially minor territory of France, the Clipperton Atoll is a ring shaped reef that encircles the lagoon on the island.

Surrounded by the largest coral reef system in the Southwest Pacific, the four major reefs that call Fiji home are a spectacle to see. Unlike many other reefs in the world, the reefs of Fiji are extensively monitored by the Fijian government, where it is actively managed and has stringent conservation controls.

Located in a remote part of French Polynesia, the Gambier Islands are home to most of the good coral reef population in the area. Sometimes referred to as the Mangareva Islands, the area includes five volcanic islands and around 19 smaller inlets home to deep lagoons and surrounded by coral reef.

Thanks to its predominately tropical climate, French Wallis and Futuna feature warm waters year round and some stunning coral reef formations. The coral reefs surround the entire island of Wallis, creating a lagoon type look between the reef and the actual shores. The main island of Uvea is a site to see, consisting of nearly 20 islets.

Located in the Pacific Ocean, Kiribati is one of the world’s best kept secrets when it comes to pristine coral reefs that get little to no publicity. The “Republic of Kiribati” is a tiny island, only a couple miles long and no more approximately a quarter mile wide. Home to the Millennium Atoll, this reef is about as remote of a coral atoll as they come.

During the 2014 major bleaching event that hit much of the Pacific, the Marshall Islands may have been the most devastated of any nations. Suspected to have hit 34 of the country’s atolls and islands, the devastation made the coral reefs affected looked as if they were covered in snow according to some sources.

Thanks to the University of Guam, the coral reefs in Micronesia have gone through a major conservation effort hoping to restore and sustain much of the coral in the area. By managing fisheries, and convening a great team of scientists and community members, the efforts have shown positive results for the beautiful reefs here.

A tiny island located in the middle of the Pacific Ocean about 60km south of the equator, Nauru is actually a submerged volcano with a limestone cap of coral measuring over 500m thick. The best place to see the reef is the shallow coastal terrace measuring between 300-1000m wide and around 3m deep.

Located 2,400 kilometers north east of New Zealand, the island country of Niue, has a total population of just 1,100 people, making for a great marine ecosystem, widely untouched. The three major reefs of the island, located within the Exclusive Economic Zone with no land area, are the Beveridge Reef, Antiope Reef and Haran Reef.

Considered a territory of New Zealand, Tokelau consists of three tropical coral atolls making it one of the best places to see coral reef in all of New Zealand. Starting from the northwest, the island is made up of the Atafu, Nukunonu and Fakaofo coral atolls.

Considered by many to have beaten the odds of devastation, the coral reefs of Palau have been a underdog story of maintain beauty amongst a round of bad odds thanks to dissolved carbon dioxide and acid that have tormented the area. The gorgeous coral reefs are beloved by thousands worldwide annually with their bright colors and extensive reef formations.

Located off West New Britain, Papua New Guinea, Kimbe Bay is home of some of one of the most unique marine ecosystem s in the world. Within the Bay lies the Coral Triangle, which contains approximately 76 percent of the entire world’s coral species. With bleaching and sedimentation a constant threat, the bay is protected by the Marine Protected Area (MPA) networks.

Located on the northeast boundary of the Coral Sea, the Solomon Islands are composed of around 1,000 mostly raised volcanic islands with reefs surrounding their fringes. The Solomon Islands are located within the ‘Pacific Ring of Fire’ and are still considered to be a largely active set of volcanoes.

Often referred to as “The Kingdom of Tonga”, this island nation is hoem to some of the most unique and large coral reef systems found in the south Pacific. Located directly east of the 35,000 foot deep Tonga Trench, the 174 islands contain some volcanic islands containing coral reef and are still considered active.

Formerly known as the Ellice Islands, the Western Pacific nation of Tuvalu is located 4,000 kilometers of the northeast coast of Australia. Considered to be halfway between Hawaii and Australia, Tuvalu is made up of three large coral reef islands and six atolls.

The most populated island in all of Micronesia, the country of Guam is a great place for snorkelers and divers alike with its warm waters and healthy coral reef system. The reef here is said to be extremely healthy and colorful, in large part thanks to be overlooked as a popular tourist destination compared to neighboring islands.

Home to many of the best species of Indo-Pacific corals in the world, American Soma coral reefs play a large part in the economy and ecological landscape in this US Territory. Population growth and fishing pressure have caused some disruptions to Samoa’s beautiful reefs, but recent efforts by the Coral Reef Advisory Group (CRAG) have helped to curve that.

With their proximity to the Coral Triangle, the coral reefs located in northern Vanuatu are home to some of the richest in biodiversity reefs in the country. If in the area, one of the best snorkeling spots is said to be Lonnoc, which you will need a boat to reach.