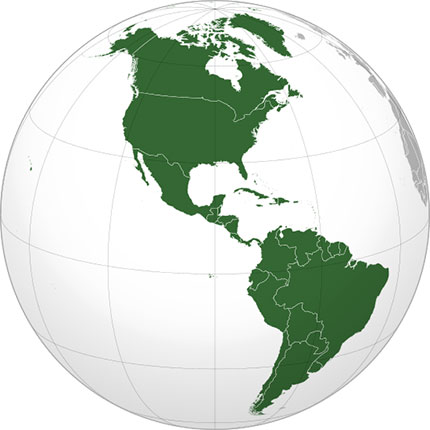 Running along the coast of Belize, the Belize Barrier reef is 300 meters of some of the most pristine coral reef in the northern hemisphere. Dubbed “the most remarkable reef in the West Indies” by Charles Darwin in 1842, the coral reef in Belize does not disappoint the thousands of divers and snorkelers alike that visit annually.

Beginning along the northeastern coast, Brazil’s six major coral reef zones cover approximately 2,000 miles along the blue waters of Brazil’s coast. Primarily featured in Brazil’s coral reefs are 18 species of hard coral, eight of which are native to Brazil. The most notable reef, the Abrolhos Bank, is Brazil’s largest reef ranging from nine to 100 miles offshore.

Being the only country in South America with coastlines on the Pacific and Caribbean oceans, Colombia is home to one of the more unique marine settings in the world. With coastline totaling approximately 3,000km there is no shortage of coral reefs and marine life to explore. In recent years there has been an effort to conserve much of the coral reef along the coast from hurricane damages.

The most beautiful reef in Costa Rica can be found jut to the south at Cahuita. Spanning 500 meets out from Cahuita point, the reef is fan shaped and covers approximately 593 hectares and is home to 35 different species of coral.

Located on the western side of Ecuador, the Machalilla National Park is home to some of the most incredible coral reefs in South America. Alongside the coral reef that call the park home, humpback whales have also been known to breed within the park area making it a marine spectacle unlike any others.

Located just below Mexico and north of Nicaragua, the coral reefs in Honduras are part of a barrier reef system deemed the Mesoamerican Barrier Reef System (MBRS). Tragically, in part to Hurricane Mitch in 1998, about 85% of Honduras’s total live coral reef mass was wiped out.

Thanks to its warm waters and generally mild tropical climate, the Gulf Coast of Mexico is one of the most premier places for coral to breed in the world. The Mesoamerican Reef, the second largest barrier reef in the world, starts just off the tip of the Mexican Yucatan and dives south well into the Eastern Pacific and West Caribbean.

The same reef that you will find off the coasts of Belize, the Belize Barrier Reef, you will find to be present off the shores of Nicaragua. The best place to find them are The Corn Islands, which surrounded by them offer some of the best snorkeling and diving Nicaragua has to offer.

Occupying two oceans, the Pacific and the Caribbean, the Panama coral reef is unqiue that it has only lightly been affected by humans as tourism isn’t a major industry as in with other nations in the area. It is an interesting experience to observe reefs on both sides, observing the differences environmental changes have had on both.

The only living coral barrier reef in the continental United States is located here just off the Florida Keys. Biscayne National Park is a great place to take in the reef whether it’s just viewing, snorkeling or even diving. If not at Biscayne, John Pennekamp Coral Reef State Park and the Florida Keys National Marine Sanctuary are two other great places to see the reef.