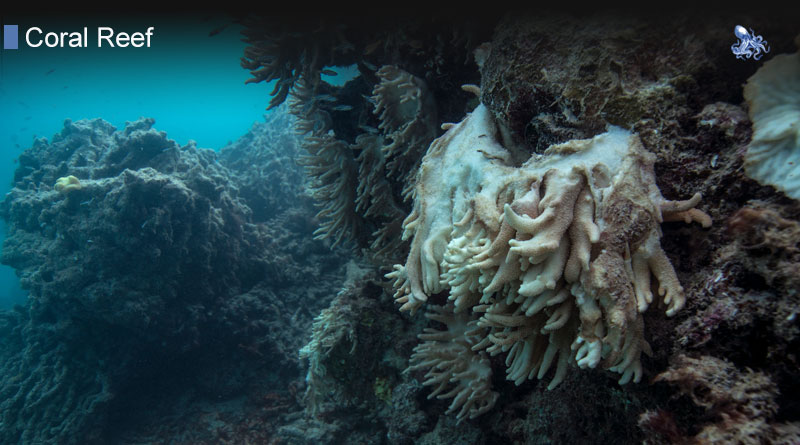 While threats such as bleaching and attacks on coral reef systems by marine animals coming from foreign ecosystems might be localized in nature, they are a product of the major global threats to coral reefs that have only been identified by science during the past century. Climate change, greenhouse gas emissions, nuclear testing and the accelerating frequency of coral reef bleaching worldwide are a few of the major causes for concern that lead to coral reef damage and, according to some scientists, might lead to the complete extinction of corals throughout the next 60-100 years.

Greenhouse gas emissions are one of the main global threats to coral reefs that have to be addressed. Although the increase in CO2 and other greenhouse gases seem to be natural, researchers have observed that air pollution was the cause for a significant part of the problem. As a result of these emissions, the oceans are actually absorbing greater amounts of carbon dioxide. The chemistry looks simple on paper, but the implications are dire. The result is a decrease in oceanic pH values that has already led to making organisms such as coral reefs more vulnerable. Acidification makes calcium carbonate skeletons and formations like coral reef structures lose their structural integrity over time. Combined with stronger currents, the threat of disease and increases in human influences, the estimates made by scientists are extremely grim, and some consider that coral reefs will be lost without a trace in as little as a couple of hundred years.

While it used to be seen as a localized problem, coral bleaching has become one of the most pressing global threats to coral reefs in the world. Typically, mass coral bleaching occurs when the temperature of the ocean increases by about 10 degrees above the normal temperature as it was in the past. Increased radiation and heat coming from the sun and long days of calm weather can lead to extreme bleaching events. The bleaching events in 1998, 2005 and 2016 have confirmed these facts, leading to several important coral reef formations being destroyed by heightened temperatures. The Caribbean bleaching in 2005 was the best example, with temperatures higher than they were in the area for the past 100 years.

Finally, nuclear testing is also an important global threat to consider. Nuclear blasts and tests in the Pacific Ocean have caused problems for decades, and when France tested its nuclear arsenal in 1995, many people voiced out their concerns and disapproval. The full extent of the damage done to reefs in the French Polynesia has only been discovered in the past few years, and as a result, many have accepted nuclear testing as one of the worst global threats to coral reefs.