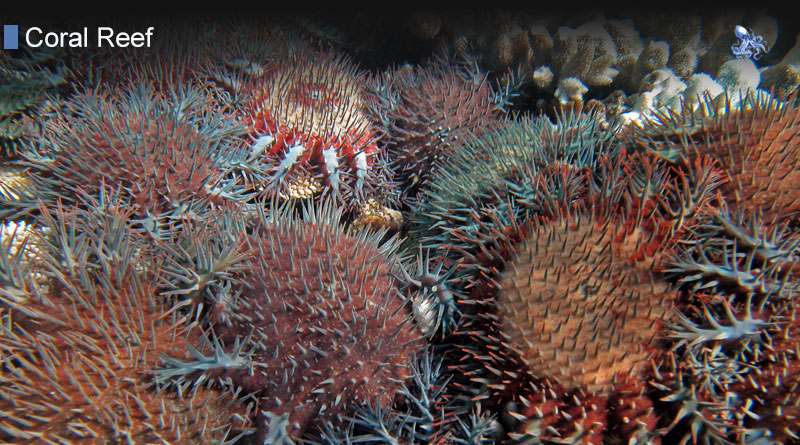 Although natural threats to coral reefs have existed since times immemorial, the problem of nature actually damaging one of its most essential and vital elements upholding the biodiversity and thriving conditions of ocean life has never been as strong today as it was in the last few hundred years. Coral bleaching, bad weather, global warming and the damage caused by invading marine species that don’t belong in the coral reef ecosystem are just some of the major issues that have to be addressed.

Coral reefs have disappeared several times throughout the past 500 million years since their evolution began, but never have natural threats to coral reefs been so prevalent in recent history as they are today. Scientists believe that the culprit is climate change. Although not fully understood, it is believe that the accelerated global warming and the increased ocean temperatures and sea level changes measured today are a direct result of humanity’s pollution and destructive practices throughout the 20th century. Anything from atmospheric pollution to oil spills and the development of coastal locations for tourism have contributed to the pollution that has affected coral reefs both directly and indirectly through global warming. With water temperatures on the rise, it is expected that all the world’s coral reefs might disappear entirely in the next 100 years, potentially leading to the extinction of countless marine animals.

Global warming has been linked to more frequent earthquakes, stronger hurricanes and more intense El Niño events. Also, even though coral bleaching has not been observed directly before 1979, scientific evidence dating back to the early 1980s suggest that mass bleaching events have occurred in 1982, 1987, 1992 and at an increasing frequency ever since. These natural threats to coral reefs have negatively affected coral reef formations in Australia and the Caribbean, as well as parts of the Indian and Pacific oceans and several areas off the coasts of Brazil, Madagascar and the Arabian Peninsula. Some of these bleaching locations were also made more vulnerable by the increasingly erratic weather patterns from around the world.

Species alien to coral reefs have been found to cause significant damage as a result of their unplanned migrations from habitats that were destroyed by industrialization, global warming and other possible causes. When introduced to the coral reef environment, many of these species adversely affect either the coral reefs and polyps themselves or the many species of marine animals they house and protect. Disease and reduced ecosystem resilience, a loss of resources and biodiversity and a severe alteration of ecosystem dynamics are just a few of the natural threats to coral reefs that have been associated with this problem.