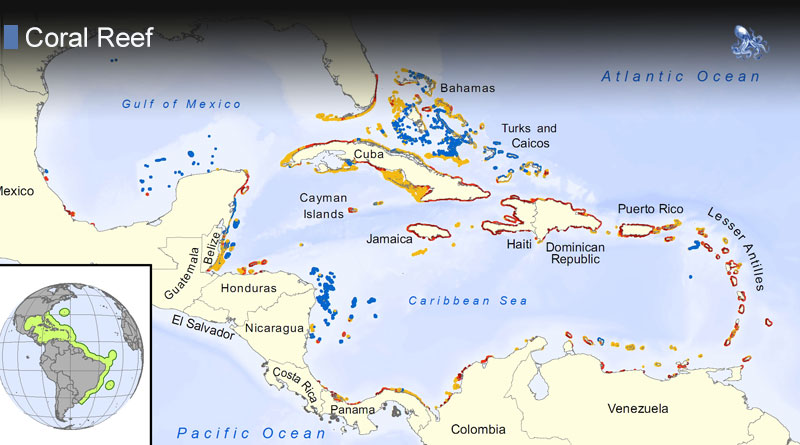 Even though global warming affects all the reefs of the world, the main threats to coral reefs in the Caribbean are somewhat more pressing than the effects of warming ocean water and changing sea levels. The decline of what has been considered one of the highest resource of coral reefs in the world has happened rapidly throughout the past 30-40 years, and it shows that the major culprit was overfishing. The main problem is that the rapid drop in Caribbean coral reef populations have led to the disappearance of certain species of fish that are extremely important for the ongoing survival of the reef ecosystem. The result is that the main threats to coral reefs in the Caribbean might lead to the near complete depletion of these reef systems within the next 20 years.

A recent comprehensive study that followed the decline of coral reefs in the Caribbean between the period of 1970 to 2012 has involved an analysis by 90 experts and the use of more than 35,000 surveys from 100 different Caribbean locations. The revelation that the study has led to showed that the coral reefs in the area have died off rapidly, and between 50% and 80% of all Caribbean reefs were lost during that time period alone. The main culprit was overfishing; other major threats identified in the study also including the rapid acidification of the sea water and the growing concern of coral bleaching.

Experts consider that the major threats to coral reefs in the Caribbean are overfishing, pollution, disease and bleaching – the latter of which are mainly caused by the growing fragility of coral reefs due to an increase in acidity and water temperature. Overfishing in the Caribbean is not something new, and factors such as globalization and increasing industrialization in Central American countries and the Southern USA during the late 20th century can also account for the greater pollution in the area. At the same time, the disappearance of grazers such as parrotfish and sea urchins was a crucial factor due to their ability to keep algae under control and contribute to the overall balance of the entire ecosystem.

To overcome the threats of Caribbean reef decline, pollution and overfishing have to be kept under control. Without restoring parrotfish and other grazer populations, experts point out that most of the Caribbean reef populations might not even last 20 years, and they will also take many endangered and declining marine species with them. The Global Coral Reef Monitoring Network and the IUCN have already proposed swift action, such as the introduction of more protected areas and the limiting of fishing, to help eliminate the main threats to coral reefs in the Caribbean.