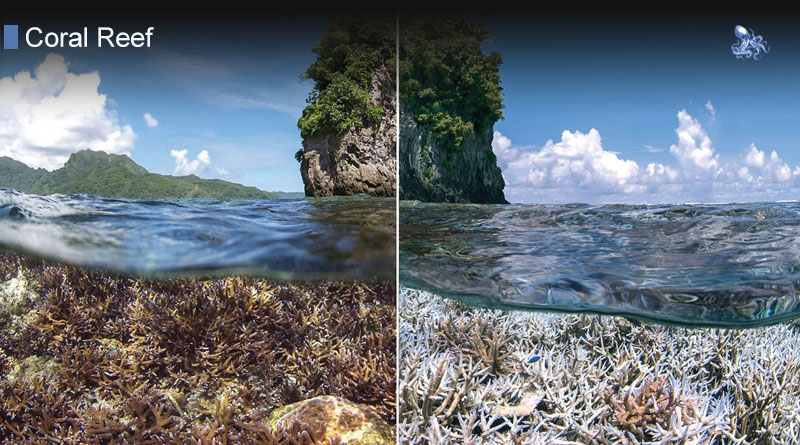 Coral reef bleaching has been an important discussion among supporters of environment protection laws for quite a long time. Considered to be significantly accelerated by global warming and pollution, the process is one that experts say is extremely bad for the ecosystem, bleaching events often causing the mass deaths of coral reefs in areas where they are vital for the nurturing of local marine life.

You may already know from school that coral reef formations are alive. They are responsible for forming the tree-like calcium carbonate structures that often prove to be invaluable for maintaining life in shallow waters, while the corals themselves are also credited for using up a large part of the CO2 in out planet’s waters, effectively maintaining the ecosystem healthy through that fact alone.

Unfortunately, since they are alive, corals can also die, and that’s what the coral bleaching process is all about. Dependent on their symbiotic relationship with single cell organisms called zooxanthellae for their continual survival, corals gradually lose the ability to maintain these algae-like organisms, under some circumstances, such as increased pollution or heightened water temperatures.

As a result, the zooxanthellae gradually leave the coral which is left without its nutrient source, and gradually dies off, effectively becoming bleached. Its white color is what gives coral bleaching its name.

The past few decades, scientists have tried to understand the causes of coral bleaching events and potentially work on reversing or preventing them. Due to the fact that coral can still recover in some cases, there is still hope; however, the destructive nature of bleaching events are very hard to counteract.

A good example is the massive bleaching event from 2005, when the US lost about half its coral population due to thermal stress caused by warm water currents in the northern Antilles, Puerto Rico and the Virgin Islands. Satellite data has confirmed that single event to be more destructive than all thermal stress caused in the area in the previous 20 years combined.

Pollution has a similar effect, and can be even more destructive at times. Stress from lower temperature water, however, can also cause bleaching, and was responsible for a 2010 coral bleaching event near the Florida Keys, where a 12 Fahrenheit degree drop in temperature has led to severe coral death.

Without coral reef, the world’s oceans could one day become barren and the pristine waters we bathe in during our holidays may even become deadly. It is extremely important, therefore, to understand coral bleaching and its relationship with pollution, and adopt a more responsible approach to minimizing the effects that our everyday actions have on the environment.