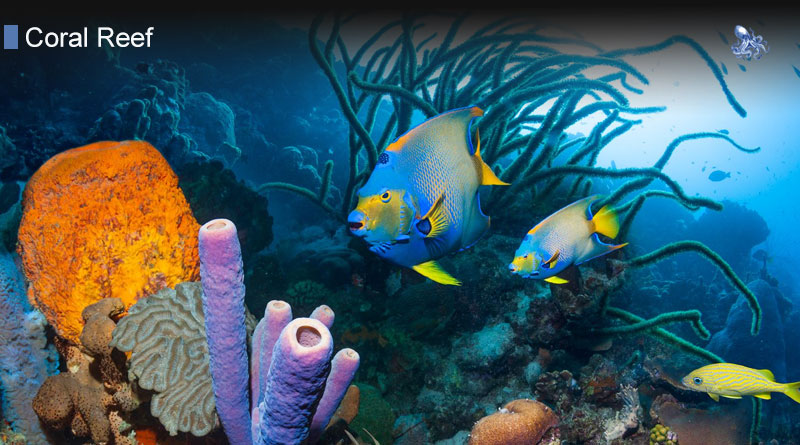 The Coral Reef Ecosystem is one of the most – if not the most – diverse ecosystem on the planet, containing not only corals, but a myriad of other lifeforms, including crustaceans, sea turtles, sharks and dolphins, anemones, shrimps, crabs, jellyfish and many, many more. The biodiversity present in a coral reef is astounding, with each component part being dependant upon many others to survive and any fluctuation in the abundance of one species can dramatically affect countelss others. Every organism in a coral reef can be classified in three categories: producers, consumers, and decomposers.

Autotrophs, or producers, form the base of the food chain in a Coral Reef Ecosystem. They synthetise glucose and other organic compounds through photosynthesis. The symbiotic algae known as zooxanthellae that resides within most corals is a primary producer. It provides the coral with oxygen and helps it remove wastes, in exchange for a safe environment within the coral’s exoskeleton and compounds required for photosynthesis. The glucose and other compounds produced by the zooxanthellae are also vital to the coral’s synthesis of calcium carbonate (CaCO3), the main building material used for the contruction of the hard exoskeleton most corals live in.

Primary producers such as Phytoplankton are food for the primary consumers of the ecosystem: sea turtles, herbivorous fish, some crabs, zooplankton, sea urchins and even certain corals. Then there are the secondary consumers, such as plankton feeders, corallivores (fish that specialize in eating corals), benthic invertebrates like mollusks and crustaceans, and finally piscivores, fish that eat other fish. Tertiary consumers in a Coral Reef Ecosystem are large fish – sharks and barracudas – along with moray eels, dolphins and sea birds. They are at the top of the food chain, primarily feeding on smaller fish.

Decomposers serve a vital role in the ecosystem by breaking down dead biological matter and converting it into usable energy and returning materials to the environment. The primary decomposers in a coral reef are bacteria. Detrivores – scavangers such as snails, crabs and worms – play an equally important role by recycling waste material and dead fishes.

Coral Reefs protect the shoreline from water surges and storms, acting as barriers. They support an incredible diversity of fish, many of which cannot be found anywhere else. Reefs act as water filtration systems for surrounding waters. The Coral Reef Ecosystem is home to roughly a quarter of all marine species, yet only occupies less than 0.1% of the oceans’ surface – truly a marvel of nature.