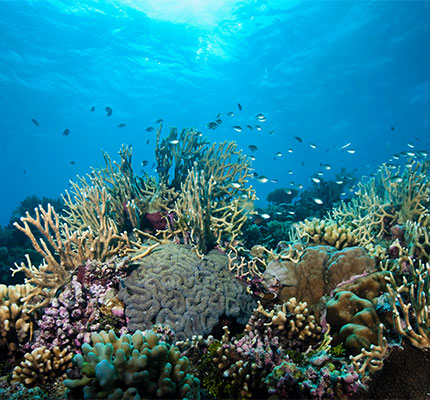 Anyone who has ever visited a coral reef has inevitably been struck by the diversity, beauty, and richness surrounding it. Coral reefs are known to cover only one percent of the whole ocean floor, but they are credited to support about 25 percent of the aquatic flora and fauna, which means about 4,000 species of fish and other forms of marine life. As a matter of fact, coral reefs are among the most varied ecosystems in the whole world. Thousands of animal and plant species rely on coral reefs for survival, and some people too, considering that corals are also important sources of income, food, protection and even medicines for mankind.

The fish that live and grow on and around coral reefs represent an important source of food for about half a billion people around the world. There are millions of people who live in coastal villages of developing countries situated in tropical areas who depend on fish living on reefs. Around 25 percent of the fish caught in these regions come from coral reefs, and not only developing countries benefit from coral reef fish, the main economical powers of the world too. For instance, the commercial value of the fish caught on coral reefs and sold in the United States exceeds $100 million.

Healthy reefs, with live corals, are valuable sources of income for the nearby communities, representing a huge touristic attraction and providing a variety of opportunities. The areas they are located in are visited even by millions of tourists every year, an entire industry having developed around them, from recreational fishing and diving tours to restaurants, hotels and other businesses running in the area. For example, tourism connected to coral reefs generated about 6.7 million visitors in Hawaii only, which meant about $11.4 billion in 2004. Recent studies have shown an interesting aspect: tourists are usually willing to pay more for their vacations in exchange for the opportunity to visit a healthy coral reef ecosystem.

It is known that storms and hurricanes are frequent in tropical regions and they affect many coastal communities. Healthy coral reefs are a protection barrier for such communities. Healthy reefs are formed by live corals that can grow and multiply normally, without suffering a negative impact from pollution or other phenomena provoked by man. Residents of the coastal communities rely on healthy coral reef structures, which are a buffer to shorelines. They provide protection against storms, waves and floods, preventing property damage, loss of human lives and erosion of the shorelines.

Numerous new medicines were developed starting from coral reef animals and plants, being currently used to treat serious diseases, like cancer, viruses, human bacterial infections, arthritis, heart disease, etc. Even more studies are being performed, and the results support the idea that in the following years, the coral reef ecosystems will represent an important source of natural and effective ingredients for medical treatments, cosmetics, nutritional supplements, pesticides and many other commercial products. All these being said, it is understandable why more and more countries began to take drastic measures in order to protect their live corals, and those that haven’t should definitely follow their lead.