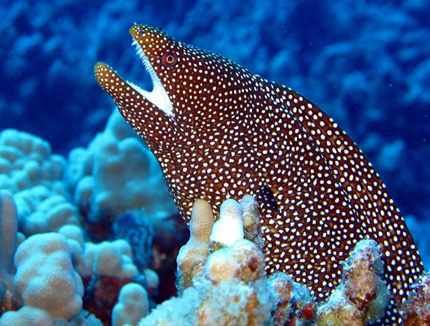 Coral reefs are carnivores, or, to be more precise, being a community, an ecosystem, not an animal, they actually give home to carnivores (predominantly). The majority of the species that inhabit the reefs are predators, feeding on other animals or scavengers, feeding on the particles of dead animals. Even most of the species categorized as herbivores feed predominantly on algae that are stand-alone life forms categorized as neither animals, nor plants. Coral reefs give home to a few truly herbivore species, too, but even these species are known to engage in carnivorous feeding at least occasionally.
One of the basic criteria used for categorizing coral reef animals is the existence of a backbone, and this is what will be used for the categorization here as well, so let’s see what vertebrate and invertebrate carnivorous species make up coral reefs.

Fish – the category includes thousands of different species and shows incredible variety, but they all share a number of features that distinguish them from fish species living in habitats other than coral reefs. Reef fish species all have relatively flat bodies that allow them to maneuver among the sharp coral branches, they are all very vividly colored and all feed either by hunting for other animals or by scavenging;
Sea snakes – having evolved from terrestrial snakes, these venomous animals look very similar to the snake species found on land, but they have tails that look like paddles. They feed on small fish.

There are two groups of large vertebrates that are regular guests, sometimes even permanent lodgers in reef areas:
Turtles – three out of the seven sea turtle species, the green sea turtle, the hawksbill turtle and the flatback turtle, are known to live on or around coral reefs
Manatees and dugongs – these large animals are predominantly herbivorous, obtaining most of their food digging up the seabed to find roots, but they are also known to feed on small fish.

Invertebrates make up the most diverse group of coral reef animals. The major subcategories include:
sponges that attach themselves to the substrate or the surface of larger coral formations and feed on the meat particles carried by the water around them;
echinoderms, such as sea stars, which are known as ferocious predators;
mollusks, such as clams, scallops, squids and mussels, some of which are herbivores, but most of which prey on smaller invertebrates;
crustaceans (shrimps, lobsters and crabs), which include scavenger species and omnivores as well
the group of polychaetes, small worm species that include herbivores, filter feeders, predators and scavengers alike.

Coral reefs are the richest and most diverse biomes on Earth. Though they take up less than 1% of the entire area covered by oceans, reefs are home to more than a quarter of all marine species. The biome is characterized not only by diversity, but also by flexibility – the vast majority of all these species prefer protein rich diets, making them predominantly carnivorous, but occasionally eating plant particles, too, while the few predominantly herbivorous species engage in predator behavior every now and then.

In late July of 2013 my wife and I visited Cayman Islands staying in a private home in Grand Cayman.

The Rich Historical Heritage of Cartagena in Colombia With a rich history, relaxing pristine beaches and one of the major

August 3, 2021 Comments Off on Hawaii Honolulu