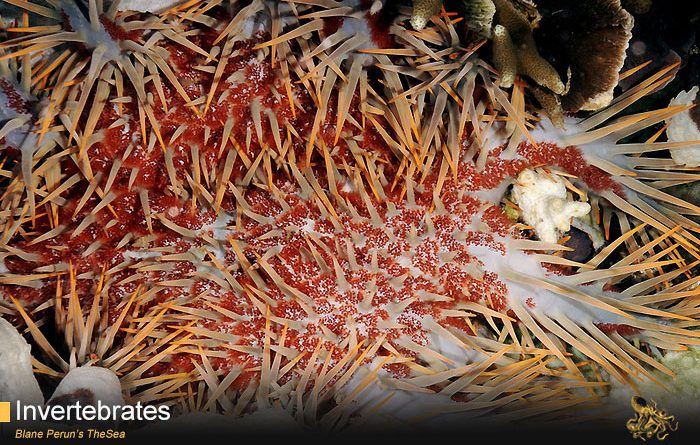 The crown of thornes is one of the few species of star fish that can grow up to sizes of more than 13 inches in its arm span. Also known as Acanthaster planci, this large and intimidating creature is a carnivorous predator that, however, preys mostly on coral polyps. Despite its strong natural defenses, the sea star has quite a few predators, among which can be counted the Triton’s Trumpet – a large mollusk – a shrimp known as Hymenocera picta, and a distinct species of pufferfish.

Acanthaster planci is a starfish that has pretty much the same body structure as a typical sea star. The central disc is surrounded by radiating arms arranged symmetrically. What stands out are its arms, which are thick, flexible and greater in number than on any other sea star. Also, the arms are heavily populated by spines which the starfish uses as a natural defense against its predators. The starfish has been known to grow up to sizes between 10 and 13 cm, and it sometimes numbers up to 21 arms.

An individual crown of thornes starfish can consume up to 6 square meters of coral per year. Although this doesn’t seem like much at first, it can be significant, considering that these large sea stars have a wide distribution throughout the Indo-Pacific, the Red Sea and most particularly in Australia. This species shows a preference for hard corals, but also tends to feed on corals like the Acropora or branching corals. The starfish is nocturnal, and in some cases it can also be spotted feeding on soft coral, particularly in areas with a lower hard coral population where the starfish has to adapt to the unique conditions on the reef.

Sea stars are known for their saponins that act almost as a detergent, but also as a toxin and natural defense system to help the starfish avoid predators. Although it isn’t particularly harmful for humans, the toxin can easily be transmitted through the thorns, as the tissue containing it is often passed into the wound of the victim. The spines are fragile, and they can break up in the process. The crown of thornes is among the starfish that don’t have an actual mechanism for transmitting the saponin, although this doesn’t make the creature defenseless.