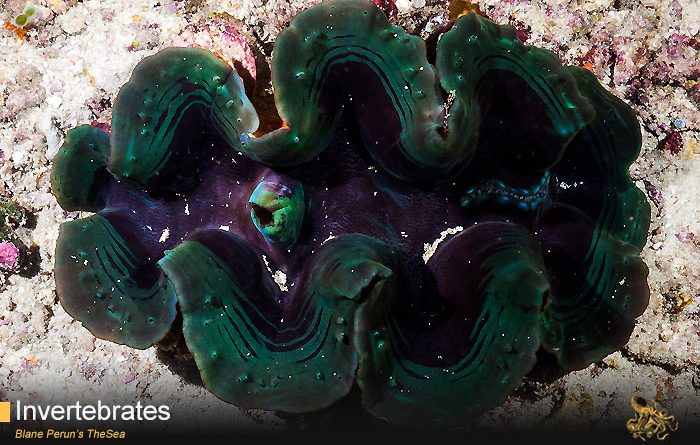 The Derasa clam, also known as the Southern giant clam or the smooth giant clam, is one of the largest species of mollusks that live in the world’s seas and oceans and also among the longest-lived marine creatures, often living to over 200 years. Native to the shallow waters of the reefs that surround Indonesia, Australia, Papua New Guinea, Philippines, Solomon Island, Fiji and Cocos Island, these large and colorful clams are often seen lying on the sandy substrate of the open seabed or in lagoons and they can be noticed floating around freely as well.

Derasa clams grow to the length of around 60 cm, which ranks them among the largest clam species. Their shell lacks ribbing (hence the name smooth clam), but it comes in six or seven folds – a feature that distinguishes these clams from other giant clam species. The mantle is colorful, with wave-like, black, white, bright green, orange, yellow and blue stripes. Inside the hinged shell is the large and soft body of the clam, a body with no head, but with a thick and muscular foot that protrudes through the hinges of the shell and is used by the animal to attach itself to the coral reef or to the substrate.

All clams in the species are born male, but they become hermaphrodites over time. They reach sexual maturity when they reach the length of 30 cm, that is, between the age of 3-5. They proliferate by means of broadcast spawning, but each individual releases only one type of reproductive fluid at a time, either eggs or sperm, in order to prevent self-fertilization. Their mating season is usually in spring.

These giant clams satisfy their hunger through filter feeding as well as by using the nutrients produced for them by the microscopic algae that live in a symbiotic relationship with the clams. When filter feeding, the creaturel uses another muscular organ called the intake siphon that also protrudes from the shell to extract the phytoplankton and other microscopic organisms and food particles from the water column. The algae hosted by the clam engage in photosynthesis and they feed their host with the byproducts of the process, such as carboydrates and other nutrients. This combined method is very efficient – the growth rate of the Derasa clam exceeds 3 inches per year.